It’s 9 days early to post a recap, but my head is thinking about wrapping 2021 up already. Plus, I don’t have any grandiose last minute plans to race or do adventure runs in the next week. Well, take that back, I want to go do an adventure run, but logistics just seem too complicated without a willing and able partner.


Anyway, back to the recap. I did a lot of really rad stuff this year. And different stuff which always makes the year seem extra great when I look back and feel proud about things for different reasons. As a lifelong runner, it gets pretty hard to PR year over year so finding other goals has kept me from feeling like I’m stuck on a plateau.


In January, I was racking up the weekly miles in my first-ever attempt to run 100 miles in a training week. I’d run 100 miles in a week before, but always with a race on the schedule. I wanted to hit this arbitrary mark outside racing and respect the discipline it took to manage those miles while staying injury-free, working, etc. The actual week itself went off smashingly. 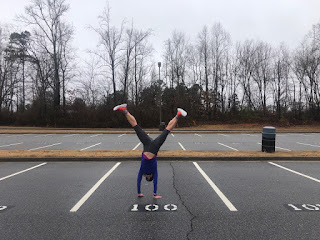 As with most things that require a process, it was the 70-80 mile weeks leading up to it that felt the most difficult. Kind of like being deep in a training cycle, but the 100 mile week was the “race” instead of an actual race.


I was really enjoying all the “short” adventure runs with the RT group on the weekends during this time as a break from the monotonous road miles from the week. We did a 50k along the AT/DRT for New Year’s, a winter wonderland run around Springer Mountain, a snowy/icy run up to Blood Mountain, and a new-to-me loop in the Cohuttas. 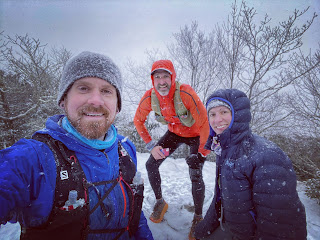 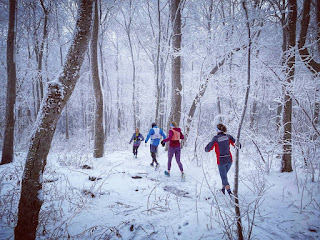 
After the 100 mile week buildup, I was ready to put my fitness to good use and set my sights on the Silver Comet FKT. When Eli asked me about it in late 2020, I wasn’t in a place to try to go after it yet myself, but was happy to crew his group’s effort. Unbeknownst to me, I also picked up a ton of intel along the way and used that when planning my own attempt. The weather was looking pretty dicey in the days leading up to it (re: cold & rainy), but I was determined to make a go for it unless it looked downright awful (re: downpour).


Luckily, it never rained on the day of the attempt. It was cloudy and kind of misty, but it was pretty perfect all things considered. The RT crew came out and offered massive support for me, crewing and pacing the entire stretch. Aaron even biked the entire thing next to me, foreshadowing the many hours we would spend suffering together in the spring.


My first goal was to get the FKT which seemed incredibly reasonable given my prior performances at the distance, but I also wanted to try to get under 10 hours and cut off as much time under that as I could. I finished in 9:47:18, fully spent and very satisfied. 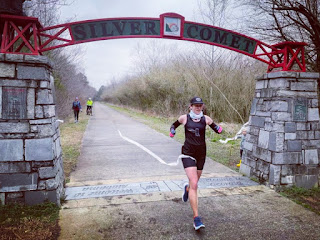 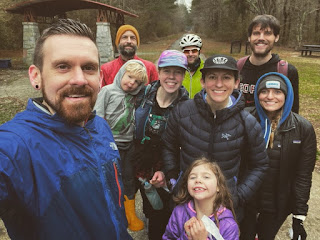 I spent the remainder of February recovering and running easy, enjoying a little down time after a couple of big efforts. The RT group went to NC for Cassy’s 30th weekend and it was a perfect 48 hours of running, eating, drinking, and shenanigans. 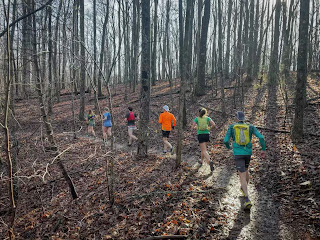 
In early March, a small group was running the Georgia section of the Bartram trail and I hopped on their adventure. Katherine and I camped at the trailhead overnight and met the group in the morning for a 35-40 mile adventure (depending on who’s GPS you refer to). We had great weather and I felt happy and strong all day. Plus, it was fun to run with new people, hearing their stories and enjoying lots of belly laughs. 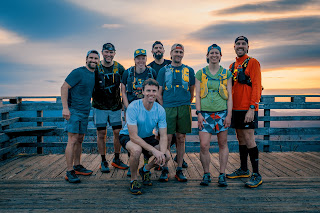 The next day, out of sheer stupidity, I had planned to do a pie 5k and backwards beer mile. It was funny, but did not feel great. It was a warmer day and the pie did not go down as easily as it did when I attempted it a few years prior. The backwards beer mile ended up being mostly a walk for me and forced me into a few days of rest after feeling jostled from the odd movement. 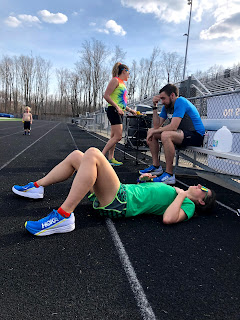 
April brought the last birthday of my 30s and the Foothills Trail adventure. I was still running long on the weekend and putting in some decent mileage during the week, but tapered off a bit towards the end of April to run the Foothills Trail. We blocked off a weekend, booked a campsite (that ultimately went unused because of all the snafus), and found ourselves running in the cold rain for the first 10 hours of the run. 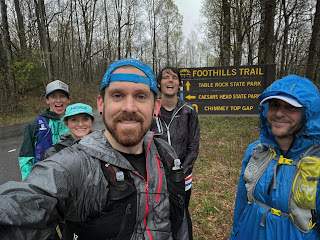 I wanted to quit at the mile 46ish mark, but somehow rallied myself to keep going and set a new time-on-feet PR of 26+ hours. Running through 2 sunrises is well, an experience. I had some good takeaways though from the adventure and though I hit plenty of low points, I also was pretty stoked that I covered 78ish miles and 15,000+ gain without a race setting. The Sullivans crewing definitely made this possible! 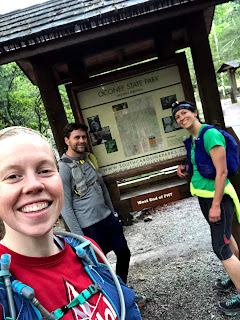 
The marg mile kicked off the month with one of the shortest, but arguably, most fun events of the year. This one might have to be a repeat!


Cassy and I volunteered together for 14+ hours at Deep Gap for Cruel Jewel. It was a long night even “just” volunteering, but rewarding to see people rally and move forward. 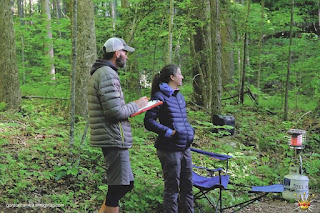 With 1 of the BRUTES (Blue Ridge Ultra Trail Endurance Slam) courses now completed (Foothills being the first), Aaron and I started to look for when and where we would tackle the next one. The Georgia Loop being the closest, shortest, and logistically easiest, we chose to go after it next. Honestly, I’m still a bit surprised at how good this day went. I was in good spirits all day, ran really strong, and ate like a champ. Of course, there were some harder sections than others, but overall, it was a great run.


Katherine was the real MVP of the day by both crewing in the morning while we were along the DRT and then coming back at night to run us in. Might I also add that she crushed some Strava crowns while pregnant coming out from Woody Gap. 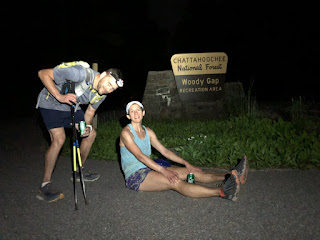 Chantal & Chris came to town at the end of the month and while I did get to run with them one day, I tweaked something in my hip and had to take a few days off.


I knew I had 5 months of 5 ultra distances in a row, but my body said it was time for rest. I was a little disappointed to not keep the momentum going, but also, respectful of the fact that long-term health > streak.


Towards the end of the month with the hip feeling better, I had a couple of good workouts and was excited to sign up for the 12 hours Merrill’s Mile with all that happened since I raced last. Mentally, I felt ready to go race and get uncomfortable.


My mind felt ready to race, but my body apparently did not. Something just felt awful from about mile 4 on and I couldn’t shake that it just felt hard. Even slowing down and walking felt bad. So I decided to get to the 50k mark and call it quits. I was definitely disappointed, but tried to not let it get to me the way that JJ 2019 did.

I traveled a few weekends in July and had some horrible sciatic pain sitting on the plane/in cars for an extended period of time. Running was hot, humid, and I wondered if I was ever going to feel like a decent runner again.


Aside from my Rad Plaid 52k loop, August was pretty horrible running-wise. I did a 52k solo around Springer Mountain and lucked out with decent weather for August. However, it seemed as though almost every other run this month was horrible.

Boston training was ramping up and while I really wanted to just go run long and easy in the woods, I knew that I needed to put in the miles on the road if I was going to have a good race. The good news is that they forced me to go early and a road 20 miler is much faster than a trail one so I was done by 10am most Saturdays.


But dang, road marathon training is hard! Especially in August in the south.


I totally (& distinctly) bombed a workout in early September, but then I guess it was the intersection of fall and fitness that made the rest of the month a billion times better than August. I had a few great trail runs including a section of the Bartram Trail with Cassy & Jared, pacing David’s first 100 miler at Georgia Jewel, and a solo Blood Mountain effort. 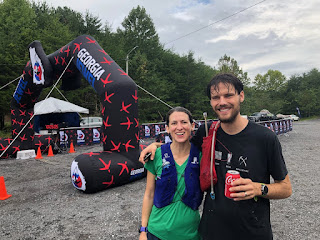 
Might be hard to top this October. The Boston Marathon returned with a fall edition of the event (thanks Covid) after bypassing 2020 altogether and skipping the traditional spring race. I was emotional about returning and raced really well - I think large in part because I was so thrilled to return. My mom came to watch for the first time and it was incredibly special to share that with her. 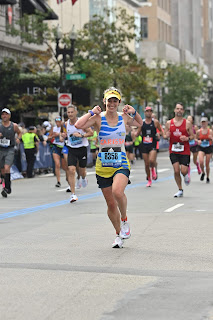 No rest for the weary though, I had DNF demons to conquer at JJ! I did a few tune-ups between Boston and JJ and headed out to the desert for redemption. It wasn’t a perfect day, but as far as ultras go and especially at the 100 distance, I felt pretty darn proud of my 22 hour performance. Plus, I got to spend the weekend with Adam, Roger, Cassy, Jared, Chantal, Chris, Megan, Laura, and Kynan. 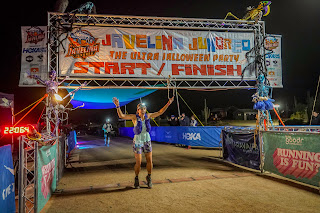 
I took 2 complete weeks off running, just walking 30-60 minutes a day and enjoying down time after a monster October. I had a chance to go to a resort compliments of my work right after JJ so wine and massages nicely coincided with my recovery.


Roger came to visit Moe over Thanksgiving and I suggested that we do the local “Feast Mode” race where you run a 10k followed by a 5k. I wasn’t really sure what to expect a few weeks after a 100 miler, but put in a solid effort for the 10k and then elbowed Roger for 3.1 miles. Then it was taper time again! 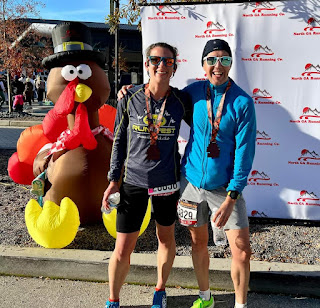 
Of all the races cancelled in 2020, this was the saddest. I think mostly because we thought it would happen for such a long time and that surely Covid couldn’t last THAT long (hahahahaha, joke’s on us). But it did happen for 2021 and it was good for many reasons. I ran well in Boston so I didn’t feel the (self-imposed) pressure to hit a certain time. But I kept my head in the game and ran a 3:24, my 22nd BQ! Also, I really was looking forward to friends I hadn’t seen since 2019. The group was a little smaller than usual, but we had fun nonetheless. 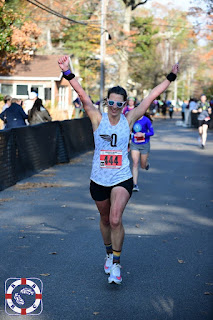 As for 2022, it’s anyone’s guess. I am registered for Boston (April), Eiger 100k (July), and Chicago (October) currently. Hopefully Covid will stay at bay and allow these events to happen. I’m in the Leadville (August) lottery and will find out in January if I am in or not. I’d love to complete the other 3 BRUTES courses, but logistics and time off to do them are a bit tough.

3) Figure out if Antarctica 2023 can happen - with Covid delaying lots of trips and waitlists being pushed out, I might have to wait another year or two.
Rambler--> Quadracool at 6:03 PM