Marathon #13 was a last minute decision. I started looking for races after a few weeks of solid streaking and found a lovely little trail marathon within driving distance. Boston is still the bigger goal and I wanted to find a marathon that could serve as a supportive long run. Because if I was going to run 22 this weekend, why not just run an extra 4.2 and get a medal for it? Runner math...

After racing 26.2 in the woods, I still have mixed feelings about trails.

Pros: Scenery, snacks, chillaxed atmosphere, and the BA feeling of running through the forest like some kind of primate.

Cons: Paying attention to every step, always up (lungs burning) or down (quads burning), and running a 9:00 m/m feels extraordinarily fast.

There were quite a number of DO's and DON'Ts I encountered over the past 72 hours. They might tell a story better than a proper RR. Partially because Penelope went all batshit on the switchbacks and clocked me at 23.79 miles. And partially because the trail miles blurred together without major scenery changes.

DO make sure to incorporate speed work, no matter how tiny, on marathon week. I did two lil' mile repeats on Wednesday (6:58, 6:40) and I felt really, really good about releasing some pent up taper energy. 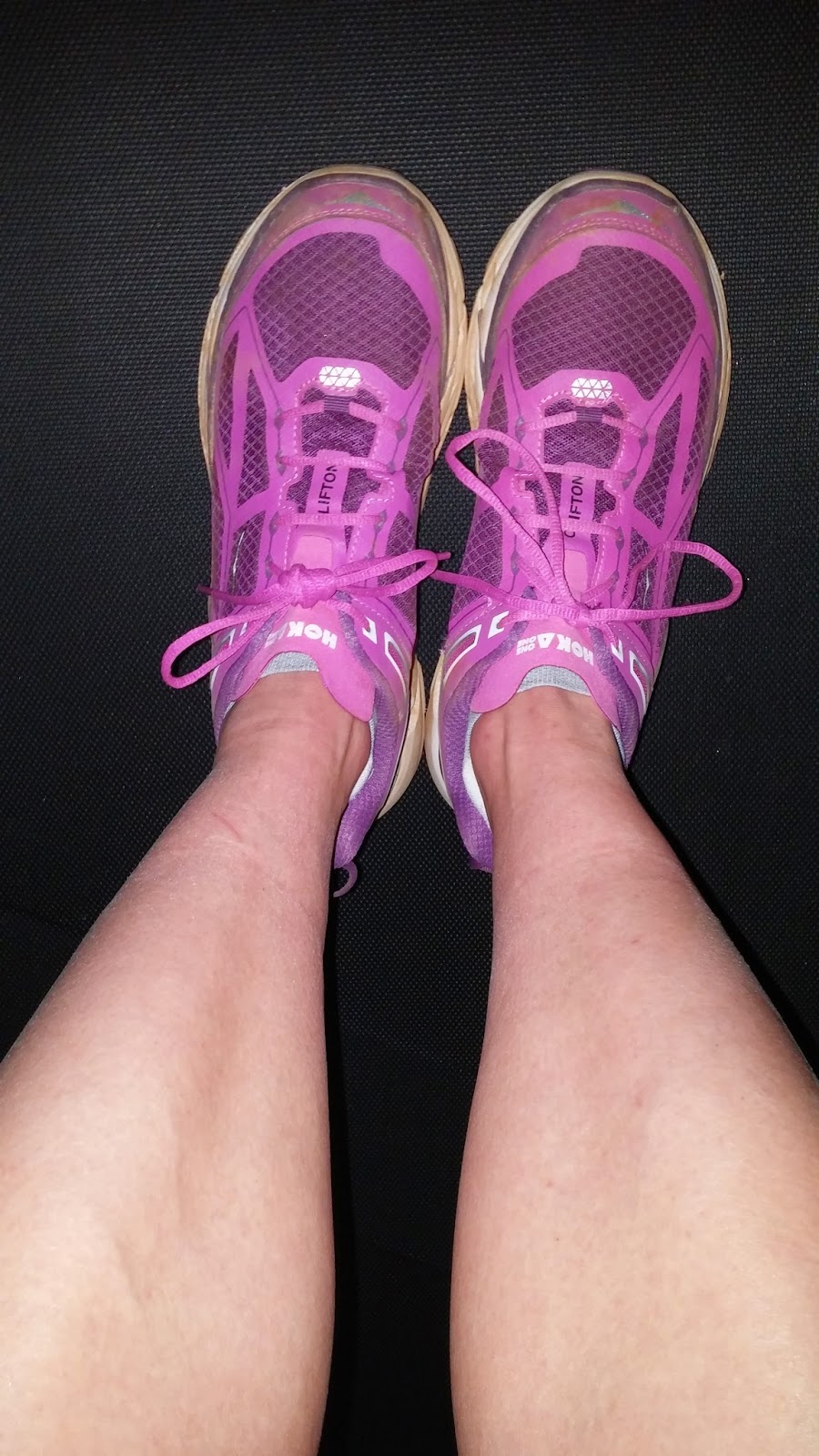 DON'T think that a dinner of a single cinnamon donut and 2 Blue Moons is ever a good idea despite trying to party like a rockstar at age 32. That ensuing migraine will serve as a painful reminder to eat a proper frickin' dinner. 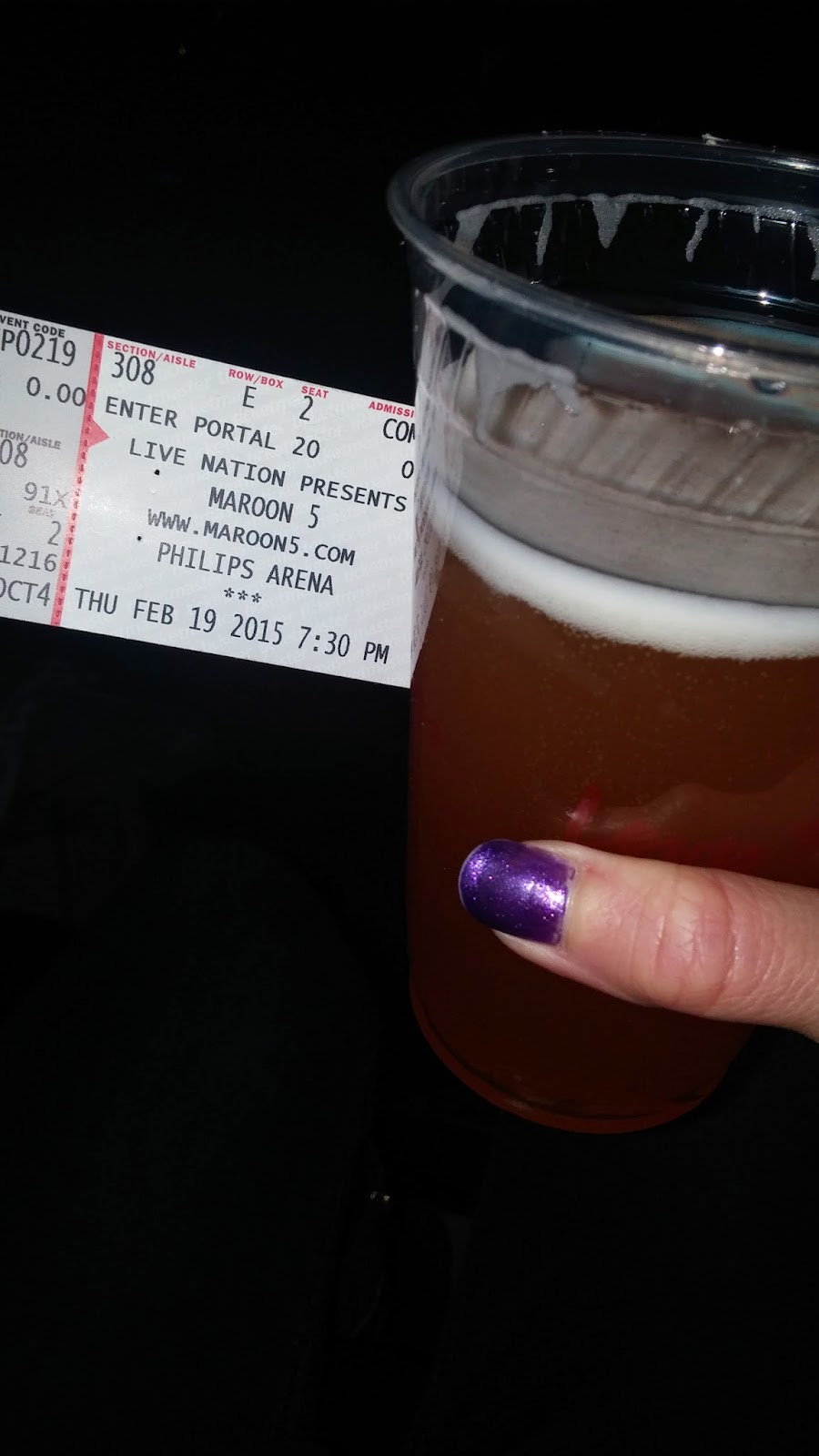 DO find the least crappy tasting coconut water to drink prior to race day. 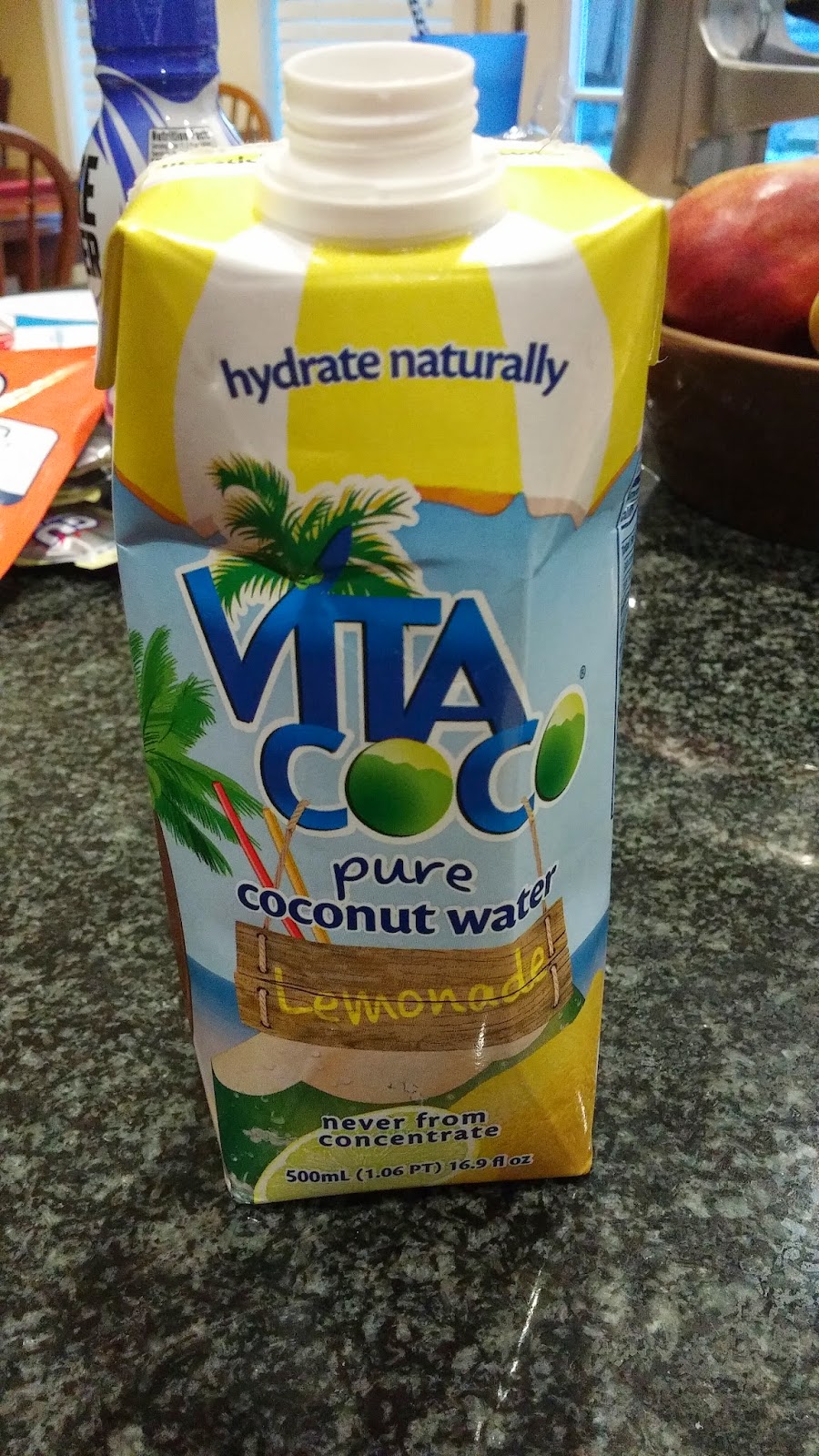 DON'T rest too much the day before the race. A short shakeout run (which I had never done except for weekend challenge events) helped calm my nerves. 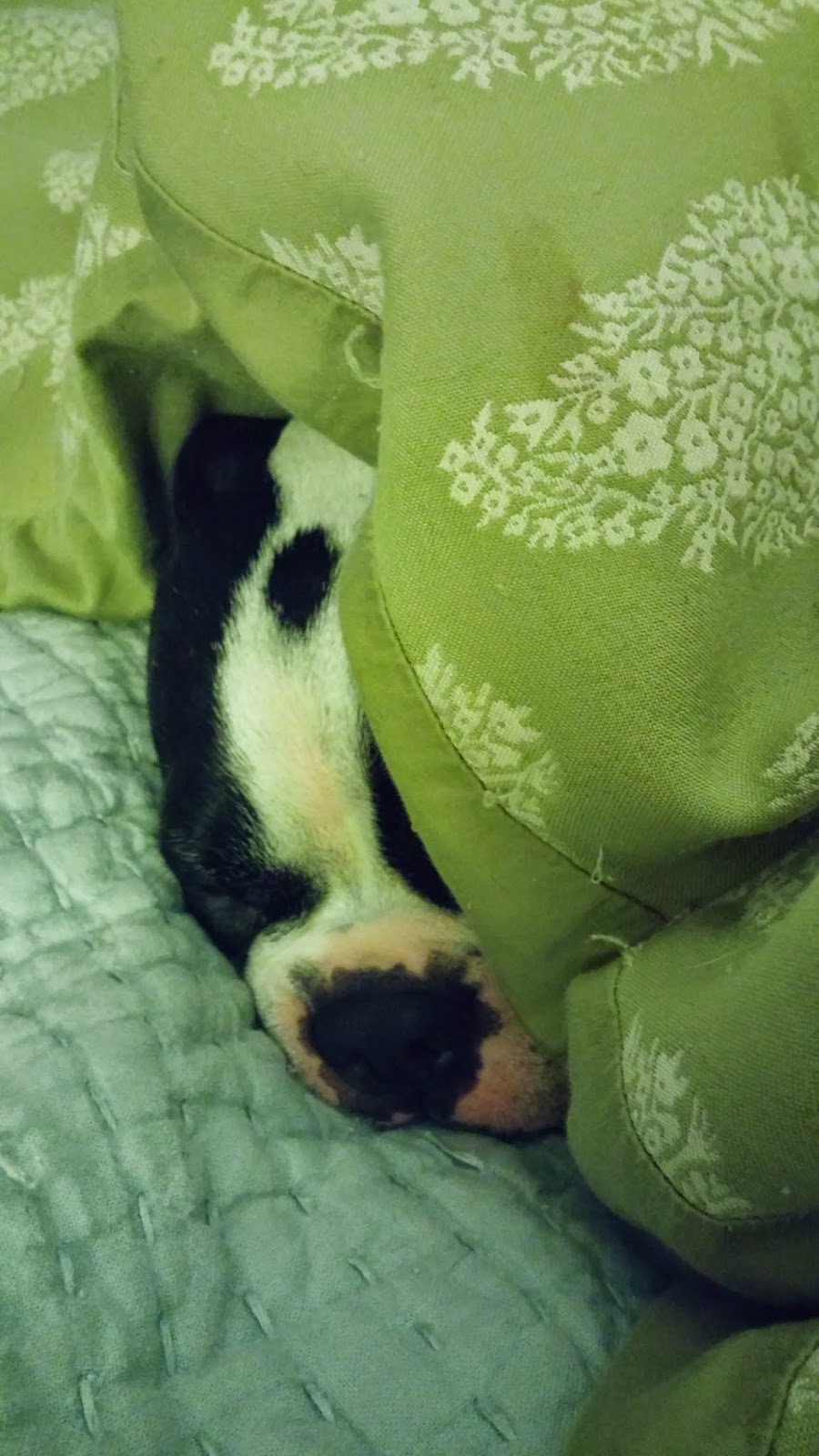 DO make a giant batch of chocolate chip cookies the day before. It not only kills time, but it makes an excellent post-race treat. I recommend only eating by the stackful after the race. 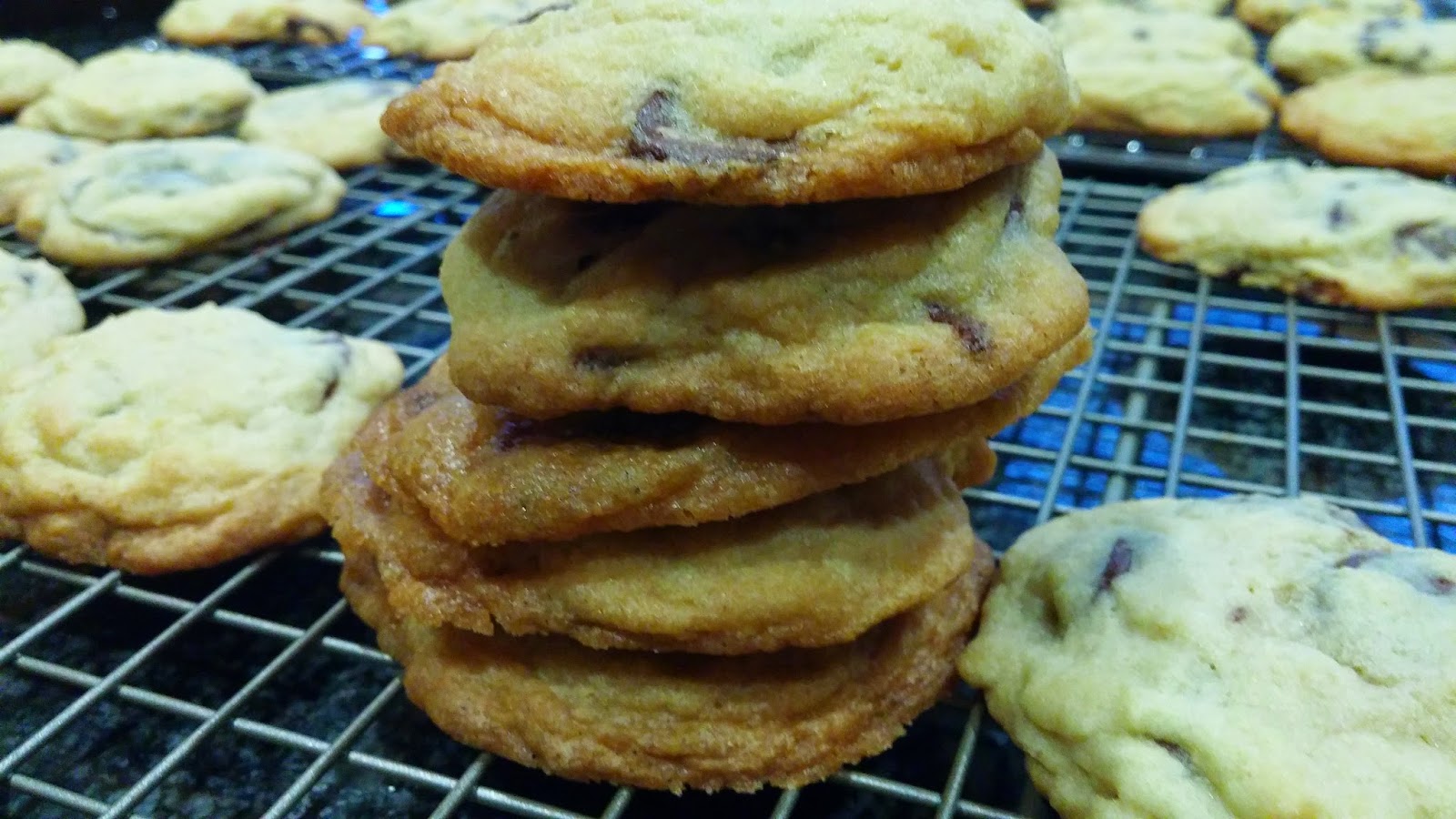 DON'T get caught up in the drama of potential icy conditions for race day. Freaky weather is only allowed to happen once per week, right? And it already happened on Monday. 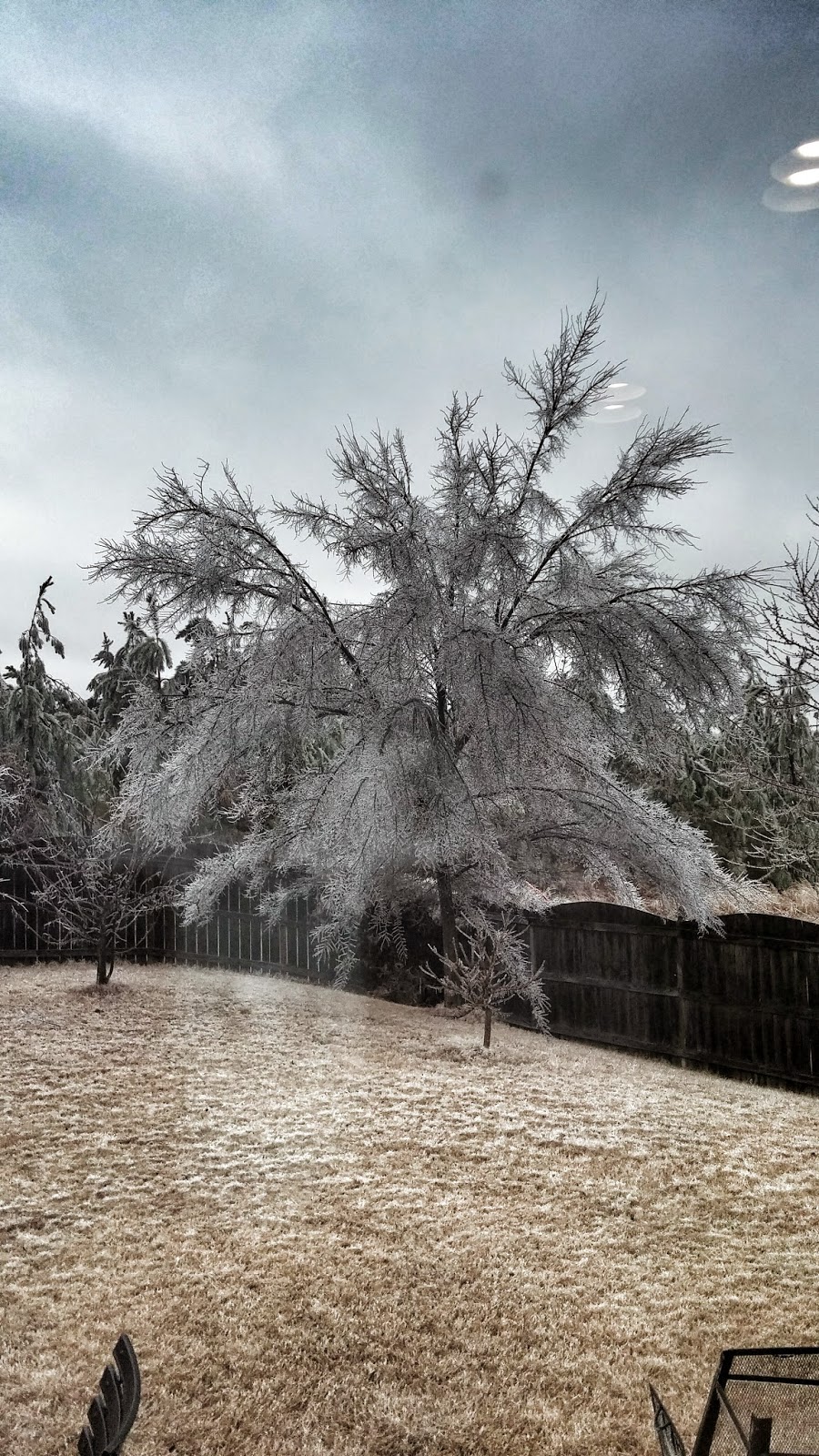 DO calm your husband's nerves about heading out in potential icy conditions though. He loves you and prefers you not in a ditch somewhere. Plus, he saw that ice on Monday too. 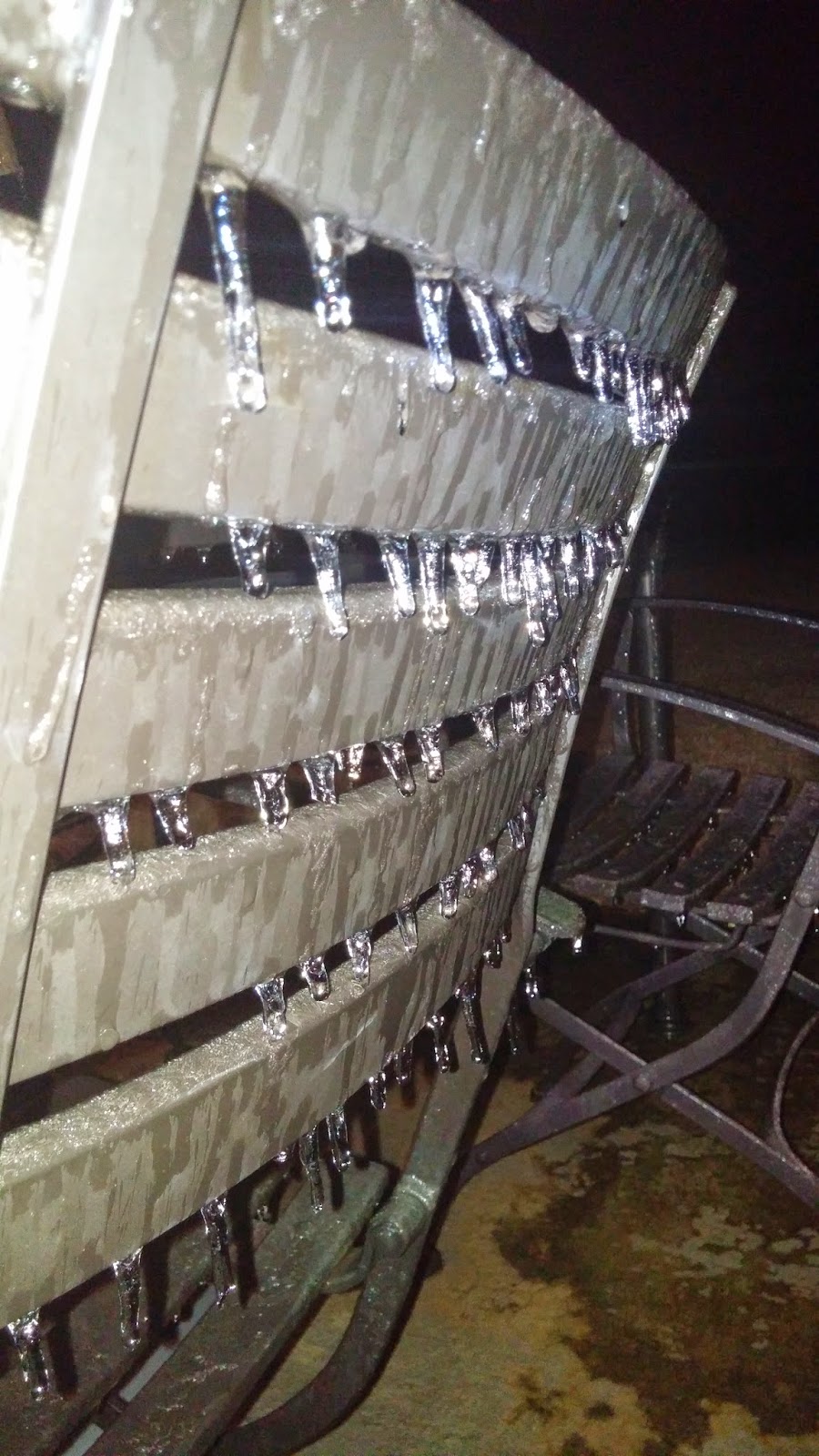 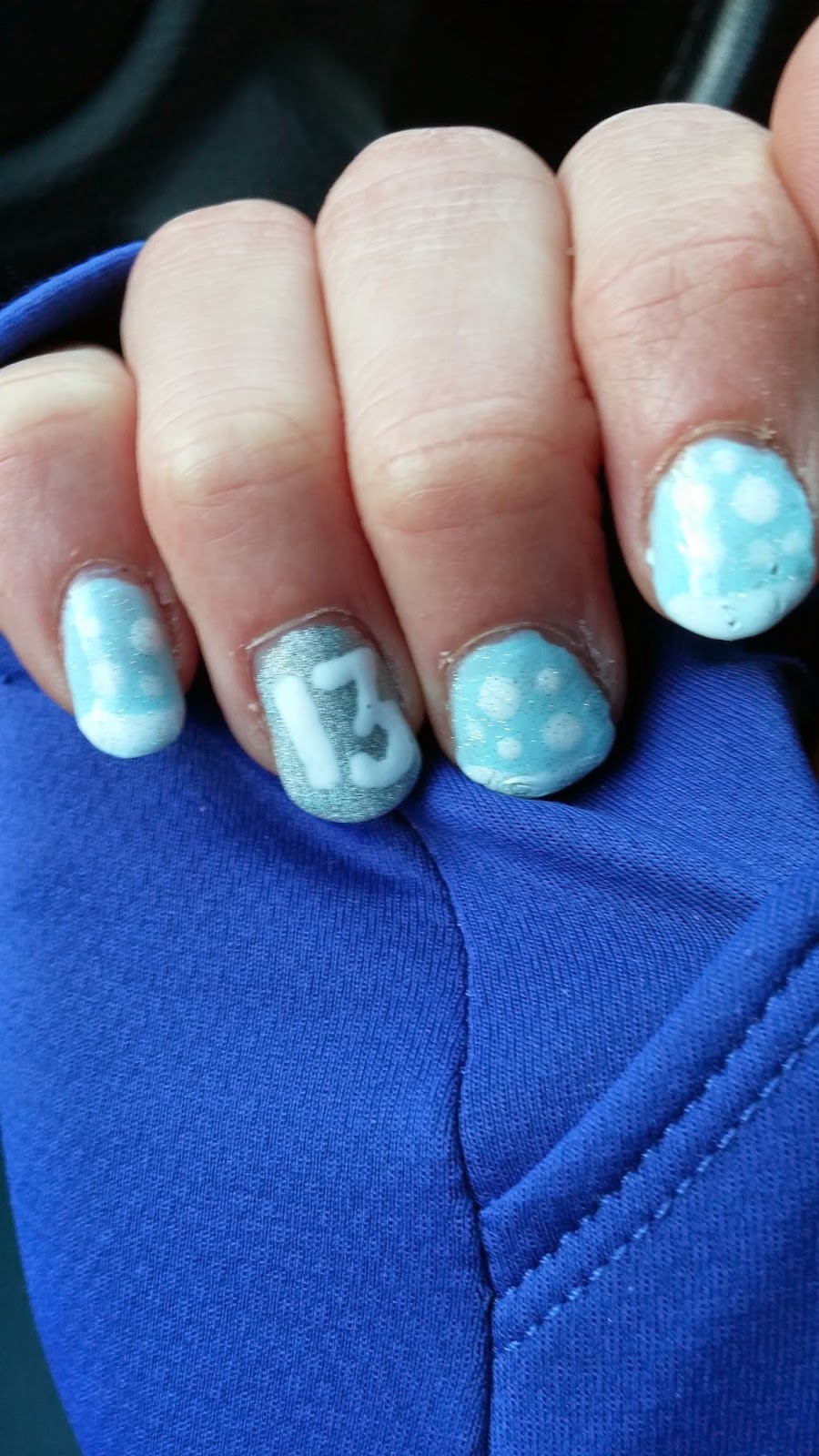 DO arrive early for a race. Give yourself plenty of time to park, pick up your bib, decorate your bib, and fret about wearing your hydration pack (will the heaviness be annoying or will I regret not having access to hydration whenever I want?). 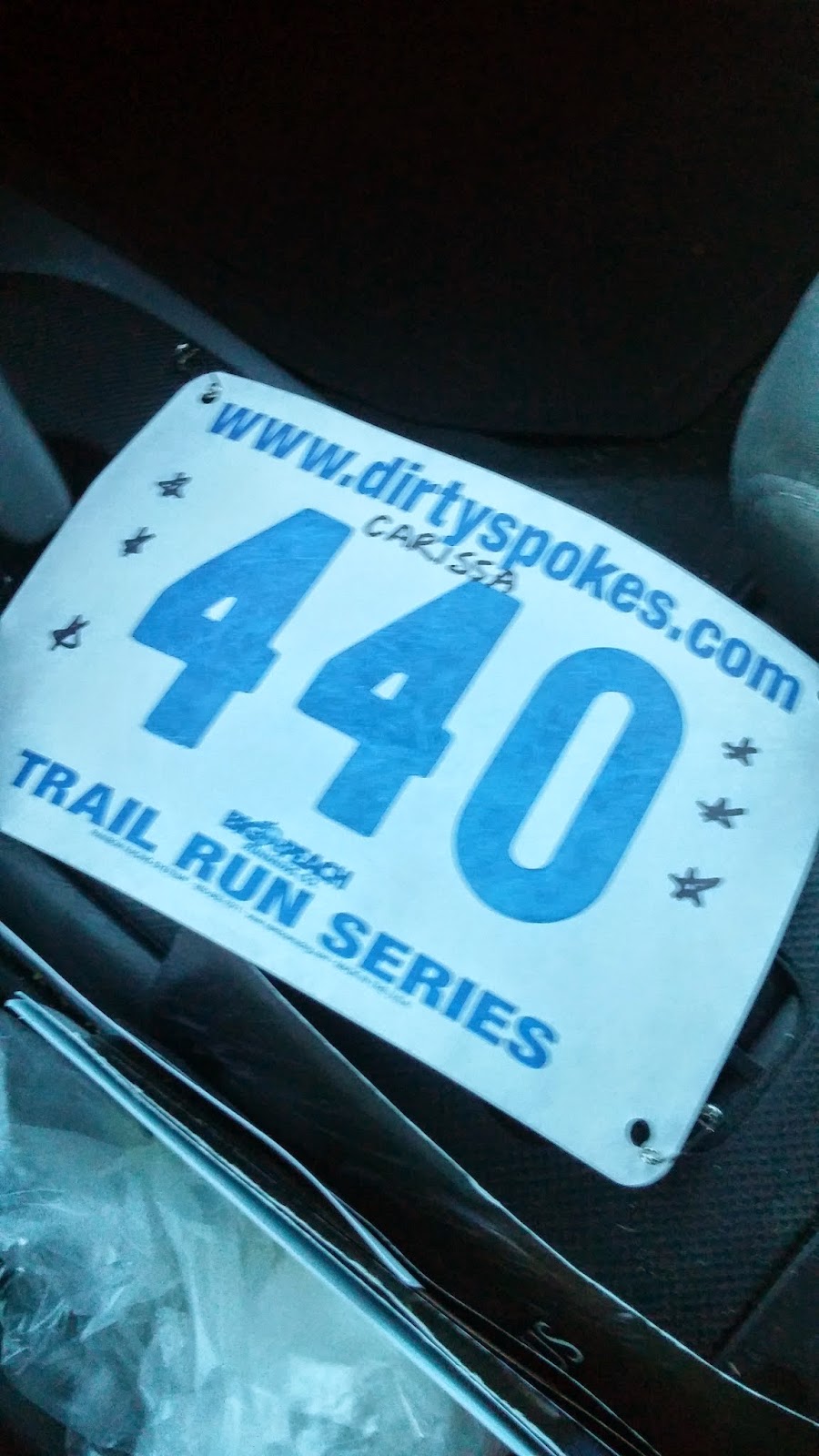 DON'T freak out when you see you put on the wrong running shoes (who the heck doesn't notice the difference between Kinvaras and Cliftons??!!) while standing in the line for the 3rd time at the port-a-potties. Post your idiocy on social media and be thankful they are at least running shoes. 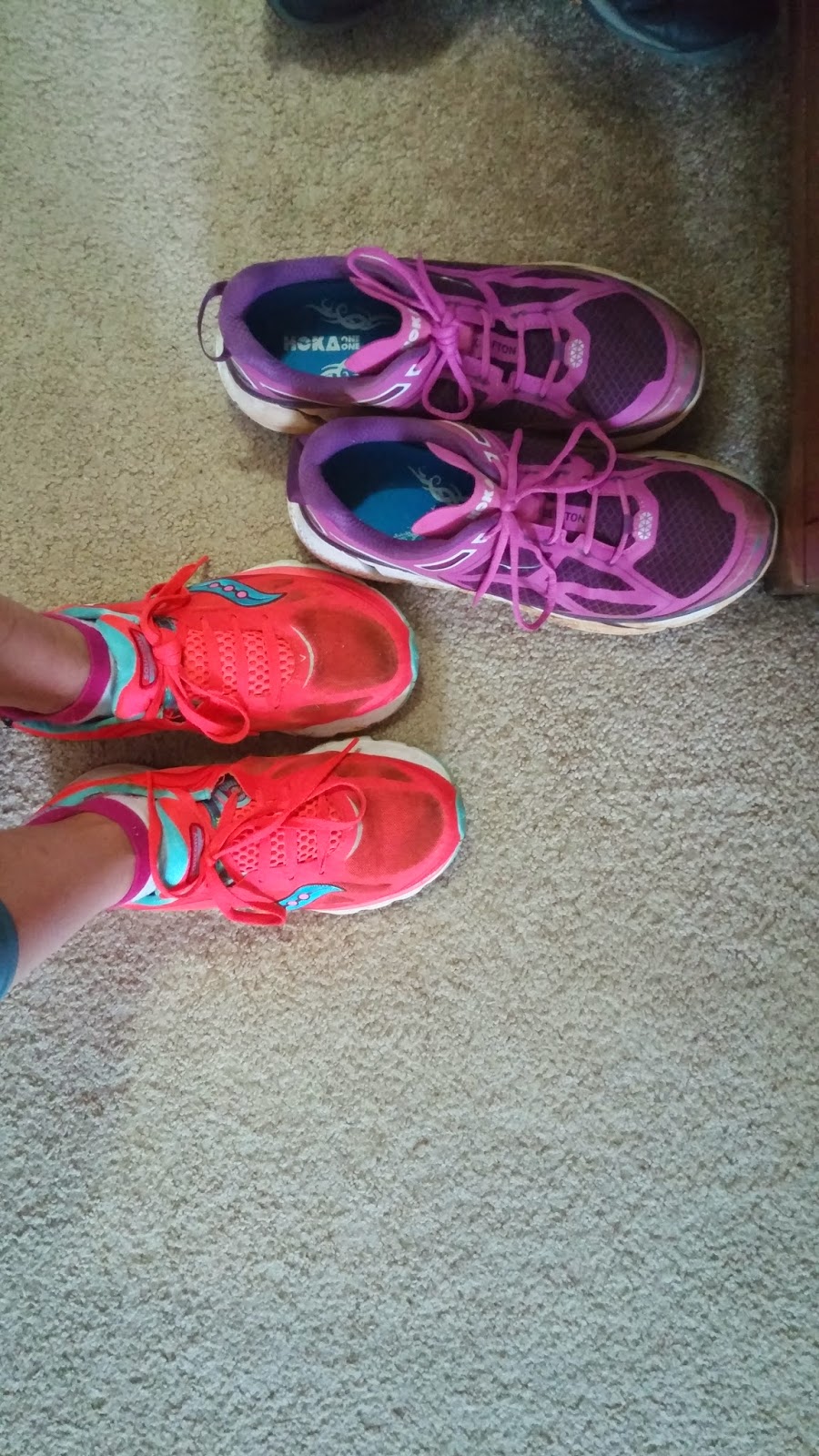 DO make sure your mantra is in plain view. Trust me, you'll be happy to see that more than once. 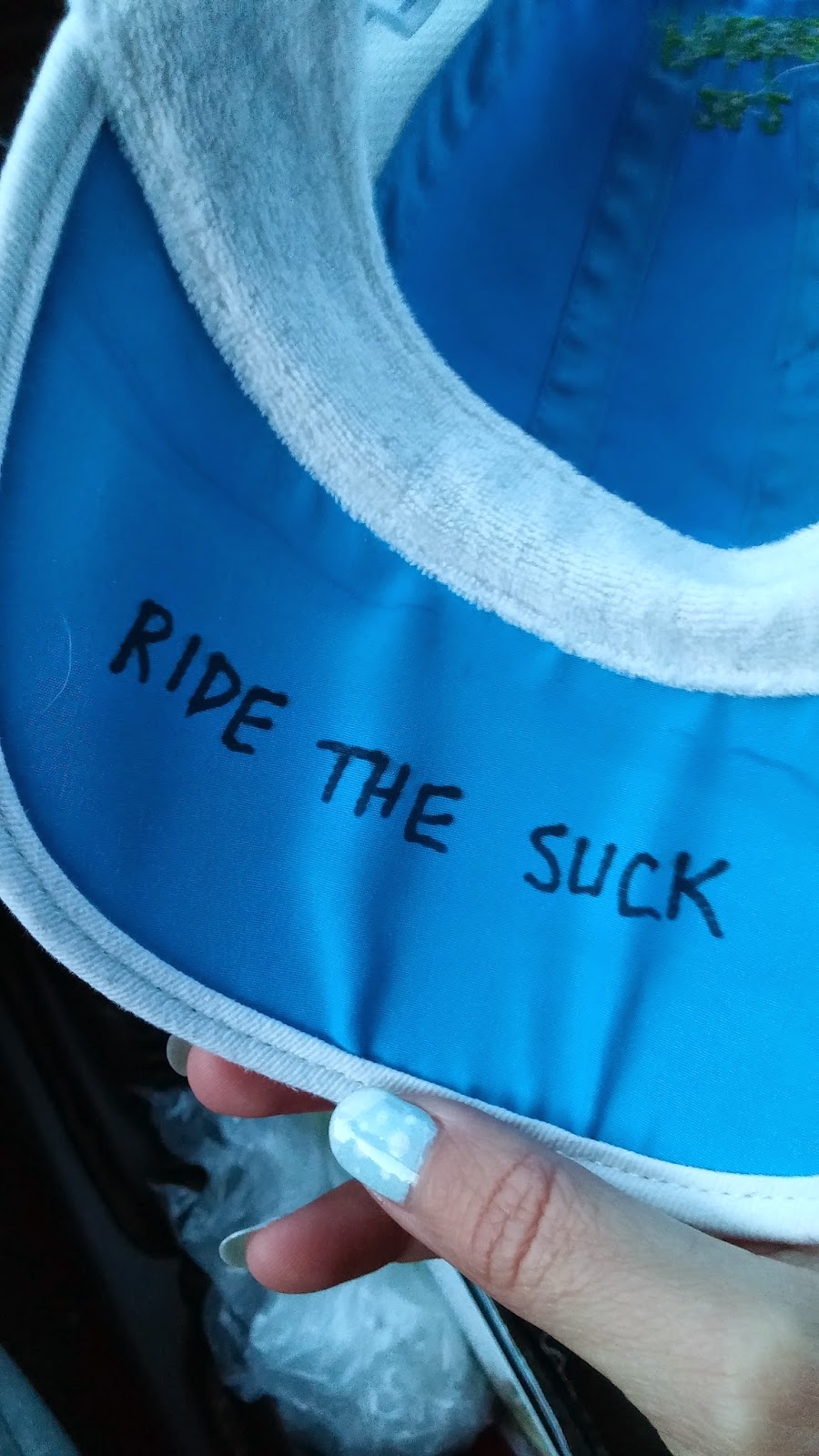 DON'T think too hard about pace, time, or the fact that your GPS watch is completely off in a trail race. Just follow the dudes in front of you (so many dudes? and hardly any chicks? hmmm...) and stay close. If it's your first trail marathon, it's an instant PR! And if you can't spot many ladies on the course, maybe you'll chance getting second in your age group! 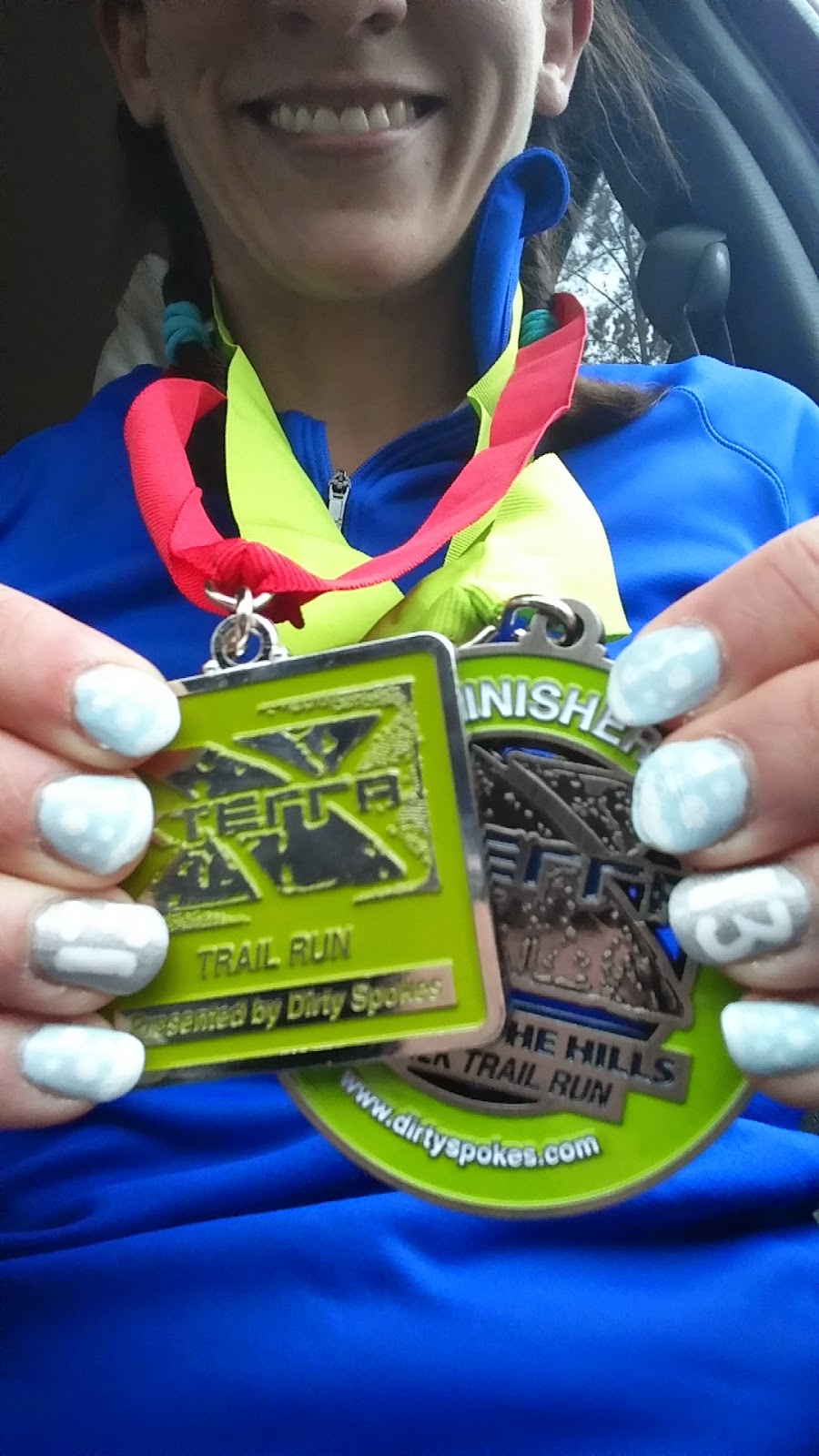 In retrospect, I really should have worn my hydration pack. Though there were 7 hydration stops and I took double cups at each, I was cramping hard once I finished. It was bad enough that I was nearly in tears for about 30 minutes post-race. Once I got some water/Gatorade/protein drink in me, I felt much better. Lesson learned.

I really had no clue what to expect out there pace-wise, but I was hoping to be close to 4 hours. There were no major hills, but it rolled the entire time. Little 6 foot roller coasters climbing up and down 100-200 feet. Much, much different than the tiny percentage gradients in road races. It was fun during some parts of the race, but I'll be the first to admit that I was relieved to push off of flat pavement for 1/10th of a mile before starting the second loop.

It didn't occur to me much while I was on the course, but when I started looking at the up-to-the-minute results posted on the picnic table I was perched next to post-race, I realized the lack of women in this race. Then I realized I was cheesing off the paces of dudes then entire race. And passed only 4 other women out there without 1 passing me. What's up with that?

Second-to-lastly, I want to make sure I am not breaking any trail racing protocols as a newb. The race was mostly on single-track sections and I got into a few packs where I was one or two people behind the front runner. If we were keeping a comfortable pace, I just stayed a stride behind the person in front of me. It actually reminded me a lot of track racing. I kept hoping I wasn't annoying anyone by running so close, but I didn't really want to pass, I just wanted to hold on.

Lastly, I ended up running right behind this German guy for the last 8ish miles who had been behind me from about mile 15. We chatted a bit though our exchanges were limited due to the task at hand, a slight language/accent barrier, and the difficult nature of trying to converse while behind/in front of another person. However, without just being able to mindlessly follow him, I am sure I would have slowed down tremendously in the final miles. My legs felt like they were on fire (but hey, my mind and gut were doing great!) and I just tried to pretend like I had to follow him to get out of the woods. I thanked him around mile 24 because I knew I might be too zombie-esque to remember at the finish line. We were about 2/10ths from the finish when he slowed down and stepped to the side and ushered me to push hard to the finish. Like it was my race to "win". Geez, if I didn't already know how bodacious runners were already.... I probably looked like an old basset hound trying to push hard to the finish, but I shuffled as hard as I could muster. We shook hands after he finished and then I lost him in the small crowd. Wherever you are out there, thanks runner dude.

The reward of character building miles

I had one of those epiphany-inducing runs today. In fact, I had 4 separate epiphanies. They were each capable of producing a blog of epic proportions. But the endorphins faded away and the afternoon wore on and thus, I am only able to cough up a brief splatter. I promise it sounded better in my brain.

1. Why my husband is so frickin' amazing to be my running cheerleader. He puts up with my incessant ramblings, race fees, and still asks me how my run was every time I get back.

2. Body image. How I am proud of the one I've got. That comparing is a dangerous game. I'd rather eat nachos than bounce quarters off my abs. Mine still allows me whip through the woods with my lungs burning on a winter day so beautiful it's almost unreal.

3. Rest. Two nights of 8+ hours and leisurely lingering over morning coffee is certainly not making running worse. It just so happens that I had 2 really, really great runs after said rest.

4. Running is awesome. No really. You didn't know?! For all the pooptastically tough and character building miles, there are a rare few that make you feel like a superhero. Where your legs feel so powerful and you get completely lost in your thoughts.

I will save my awe-inspiring posts until...um, probably never. Those things that sound so good in my brain on my run never make it to the keyboard in the same way. Why is that?

Anyway, the not-so-eloquent recap of the past 10 days includes a post of my Strava calendar: 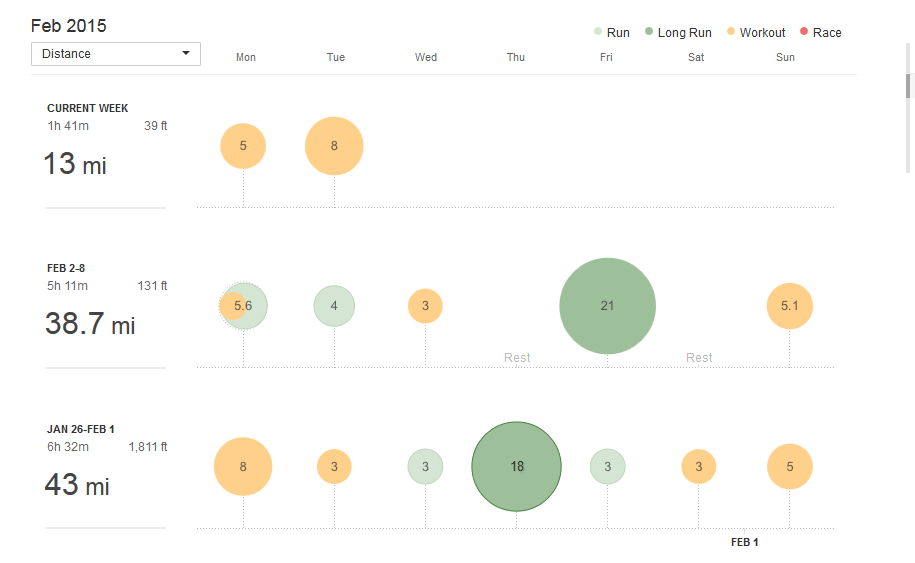 I finally dumped the streak after 35 days and an impending 21 miler. It wasn't with much fanfare. I've been a 4 day a week runner for quite some time so the fact that I made it through 35 days without much ado was enough for me. The only thing that I noticed was that I felt like my speed was lacking and my long runs were all pretty tough. So I am hoping a 5ish day a week schedule will let me get the rest I need and push me back down to my happy speeds.

I tried running last Monday after work as I knew I'd be out at 5 p.m. (early for me). I only packed a t-shirt and arm warmers and regretted not packing another layer with every step. And my Garmin somehow must have been bumped on while at work so it died in the first half mile. And then I had a Code Abby. Not really the way I want to get reacquainted with daylight runs after work. 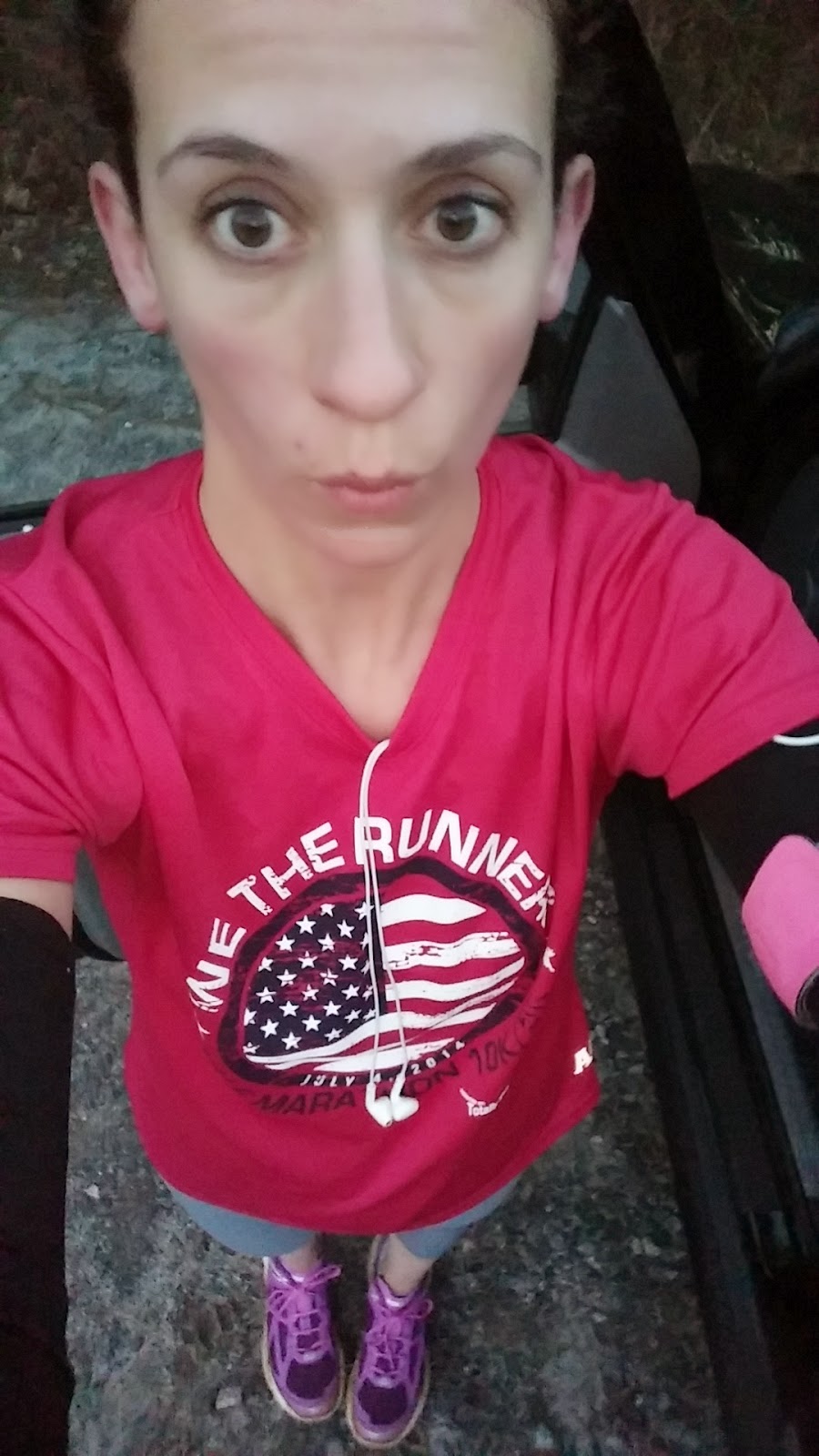 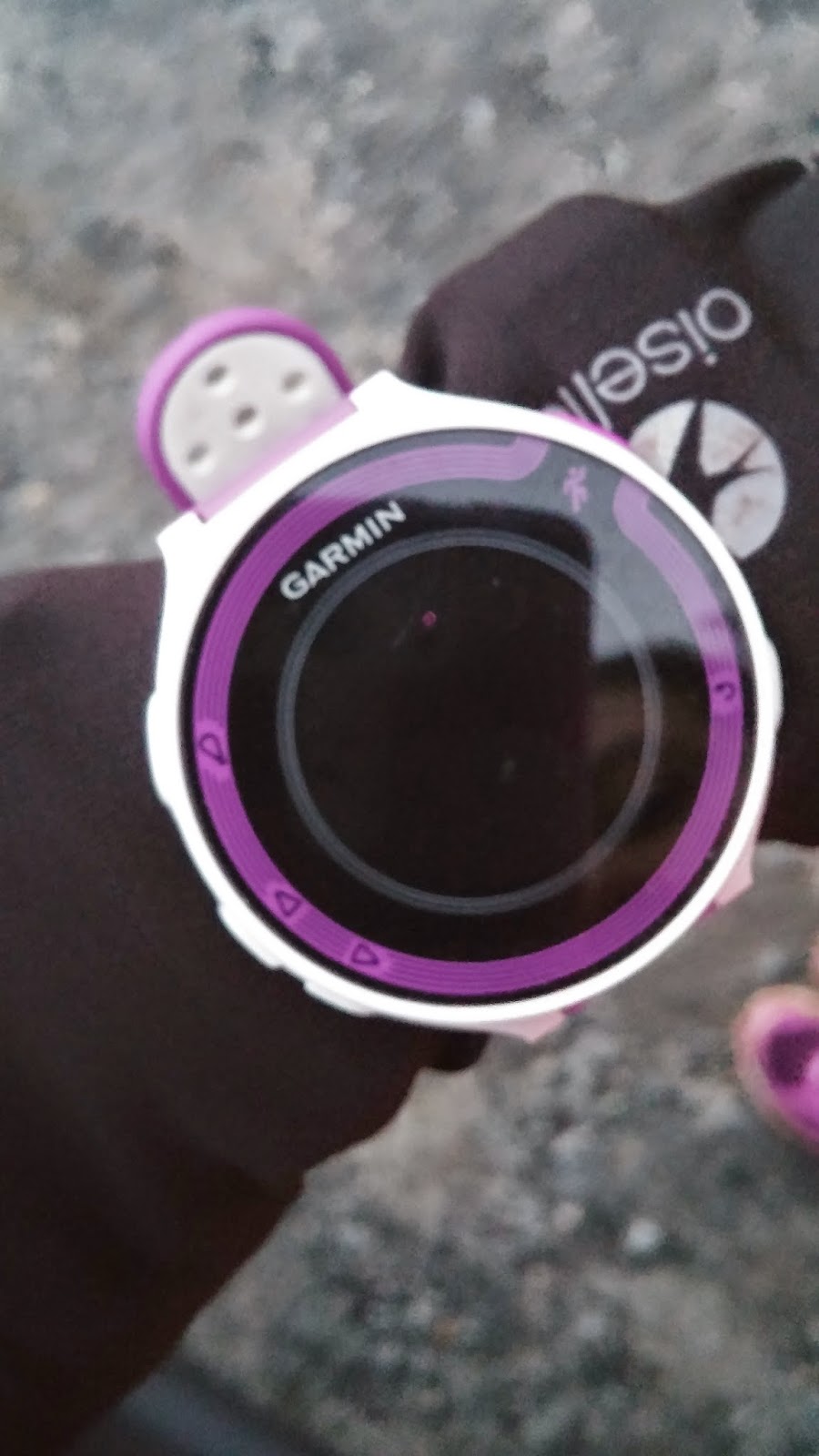 At least the sky was pretty when I finished... 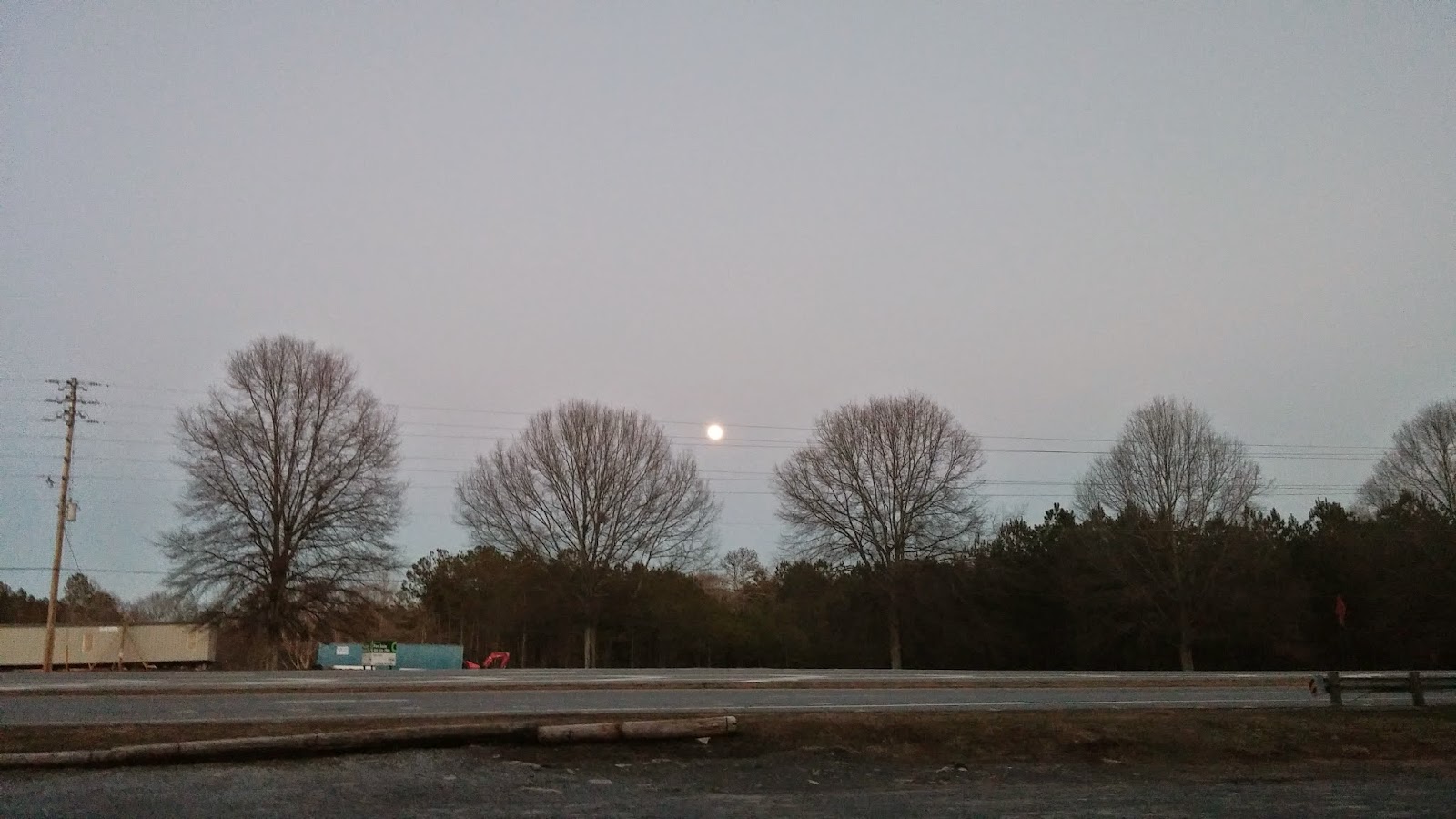 I took a rest day before the 21 miler and fueled up on garbage before my run. I normally don't have an issue with pizza, but I think there was an overload of cheese. It's not my fault cheesy bread is so delicious. 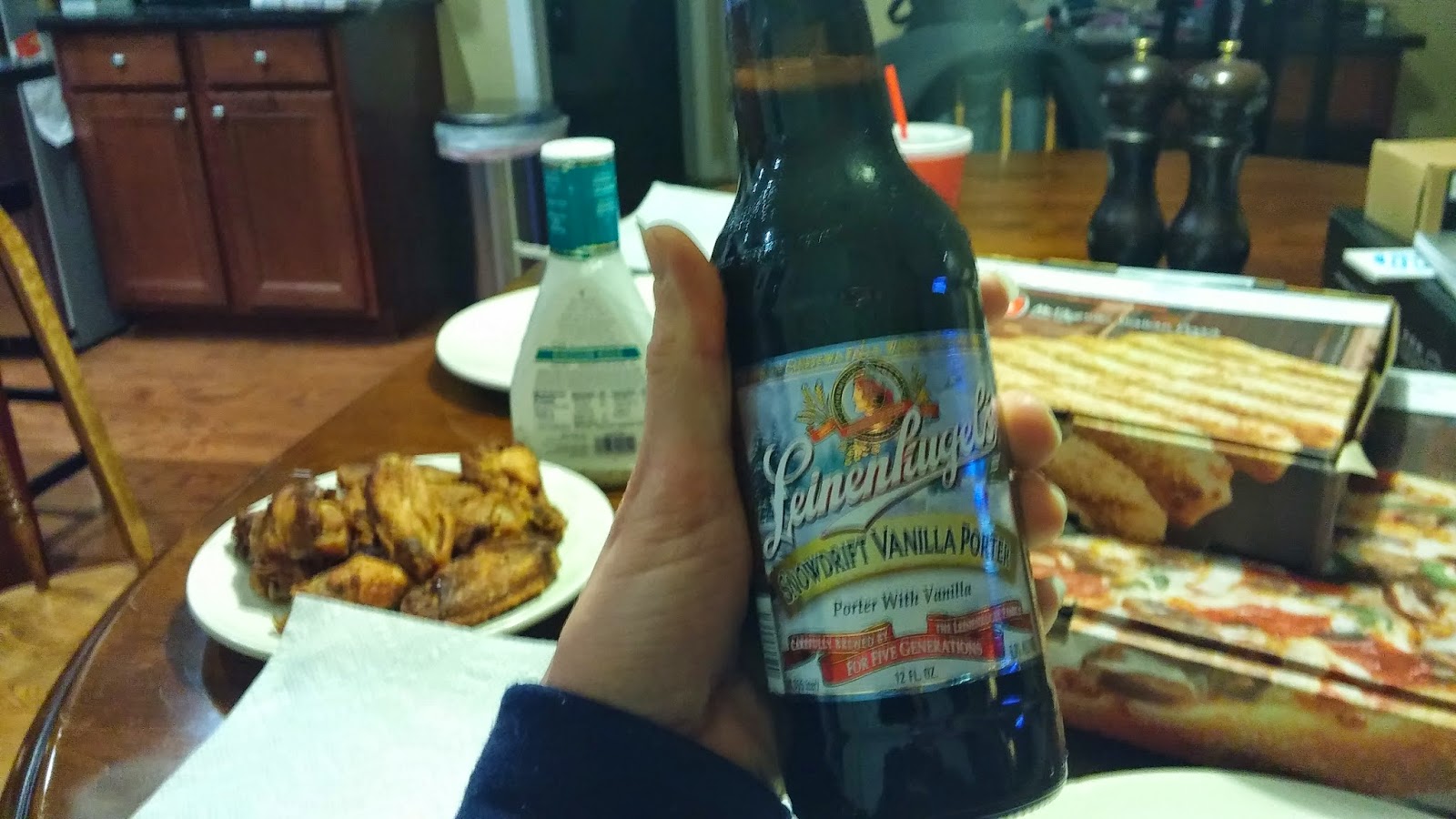 And then without giving it much thought, I ate waaaaay too much fiber at breakfast. No Code Abbys, but I felt puketastic for 16 of the 21 miles. Enough that I barely drank anything and could only suck down 1 GU. I couldn't quite figure out exactly why I felt so awful (too much fat? too much fiber? too much run streak? too little sleep? too little rest? too many hormones?), but the recipe for this disaster will certainly not be repeated. 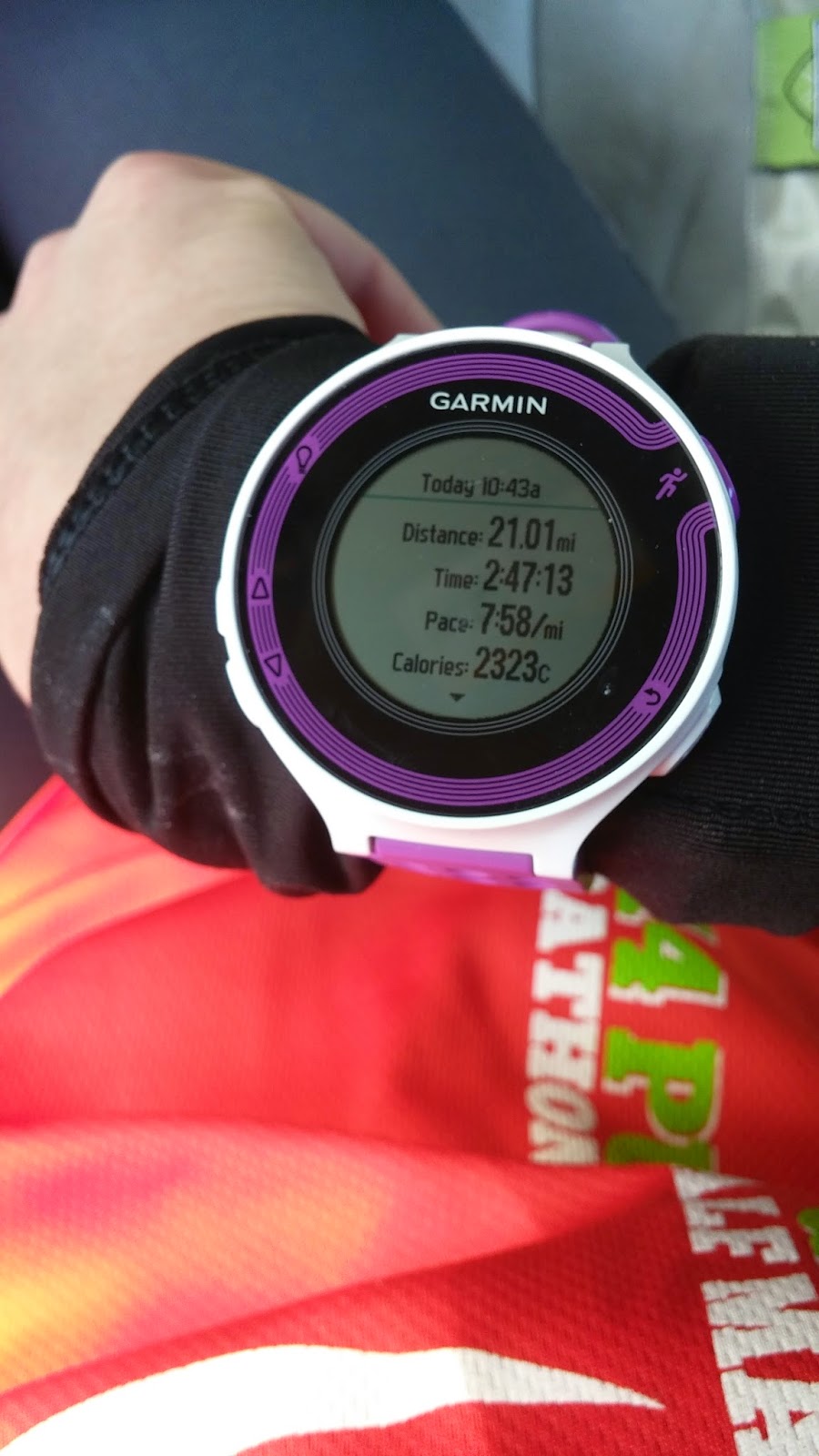 It doesn't look disastrous I realize, but it certainly awful.

Then, I was like, what in the heck is going on with me??! I have not had a great long run during this training cycle at all. Stupid rain run, stupid leg murder on the trails, stupid puketastic 21 miler. What gives?!

So I rested again Saturday. I ran 5 easy Sunday morning. It was eh.

Then I slept late, wore my Kinvaras, chose the treadmill, and actually felt ah-mazing yesterday. I did a 5 mile progressive run where I ran 8:34/8:20/8:00/7:47/7:30. Everything seemed to fall into place. I drank a green smoothie when I was finished. Sometimes I crave things that are good for me. 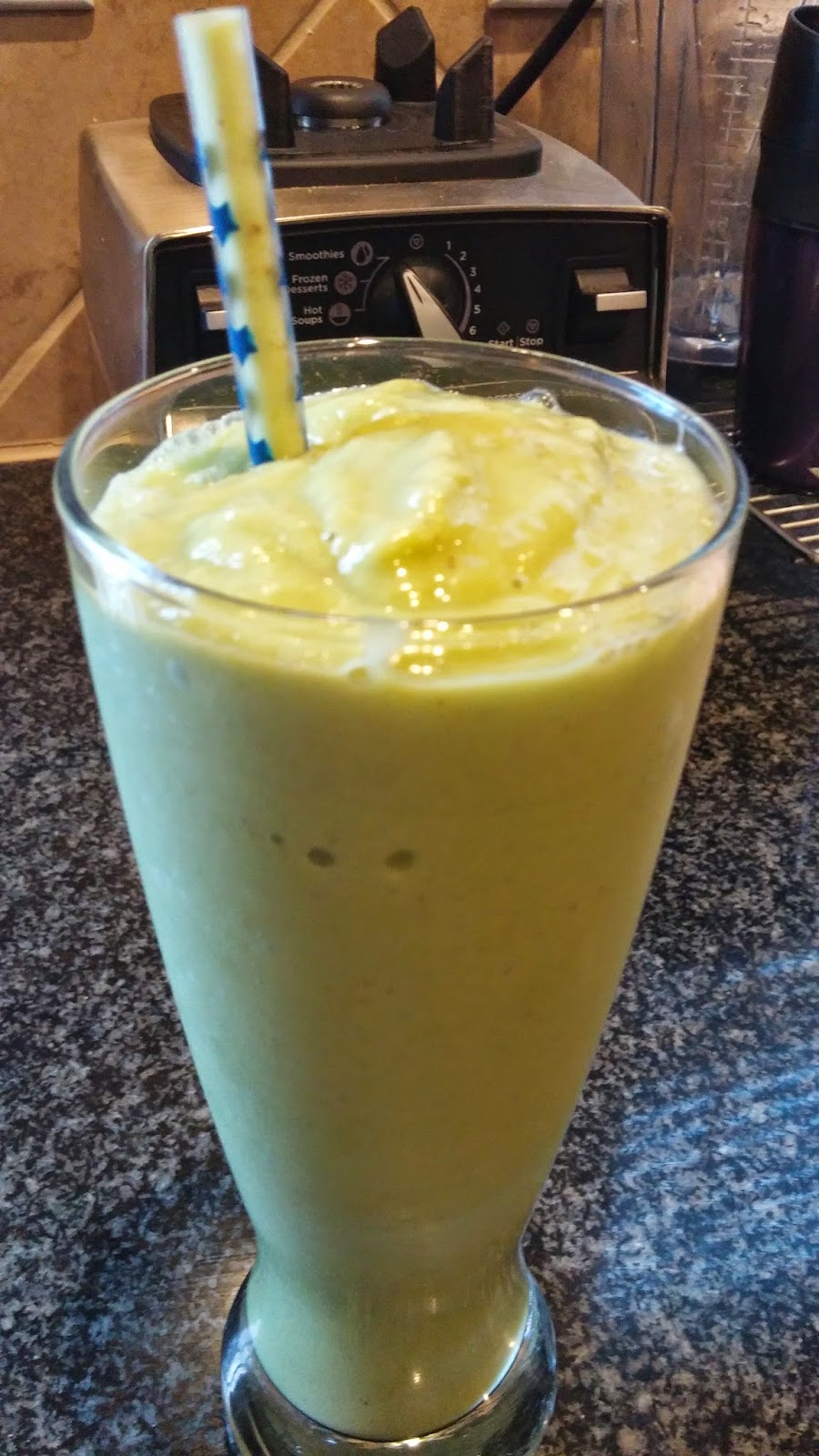 Today's run started off feeling easy. When the first mile beeped off at 7:52, I knew I was in a good place. I had in my head to do 8 and so I just tried to keep it easy through the first 3. Then I was feeling strong as I eased to the halfway point so I tried to start to pick up the pace. I neared a tempo pace in the middle miles and pushed to maintain a strong finish. It was blissful. 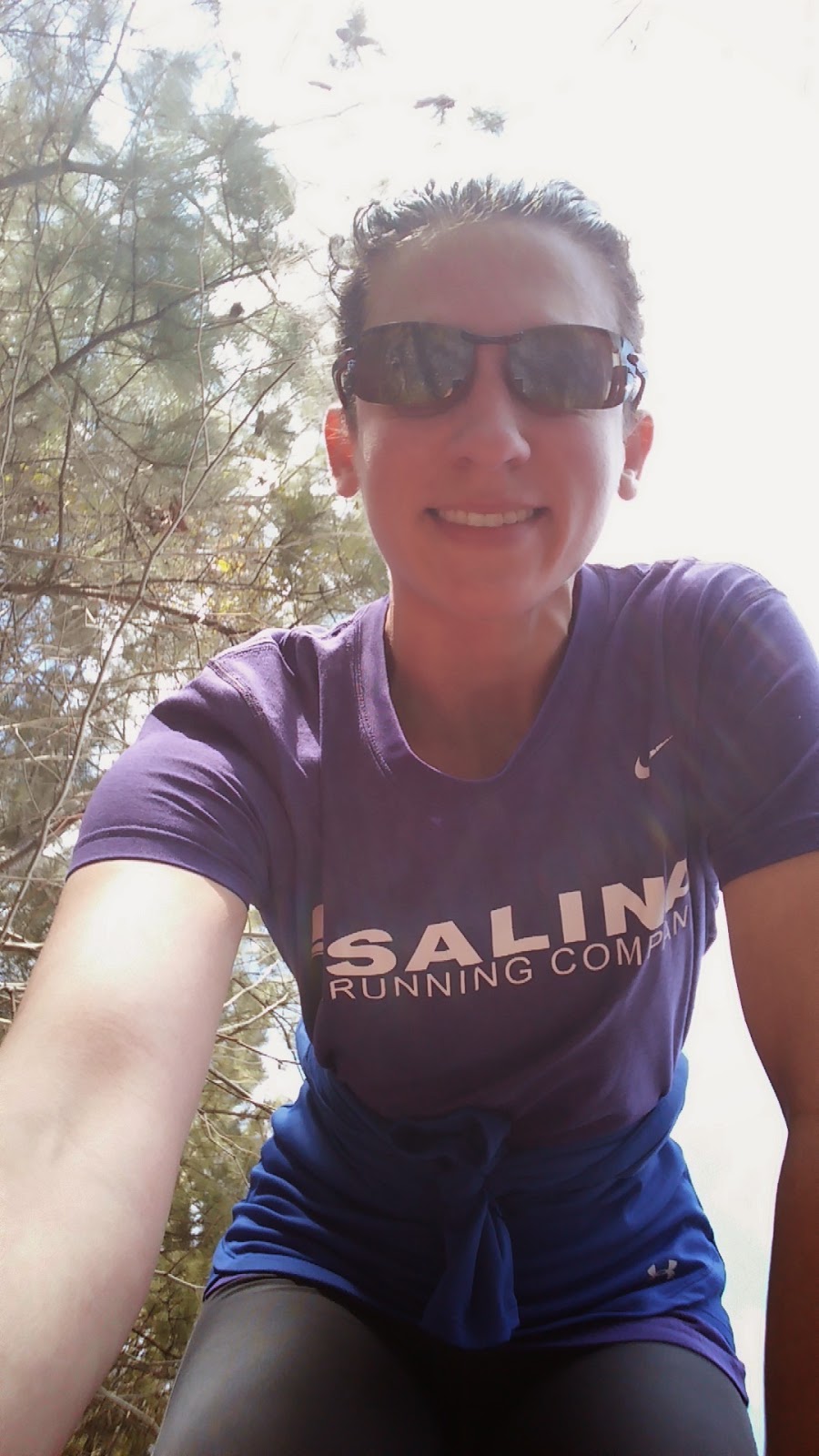 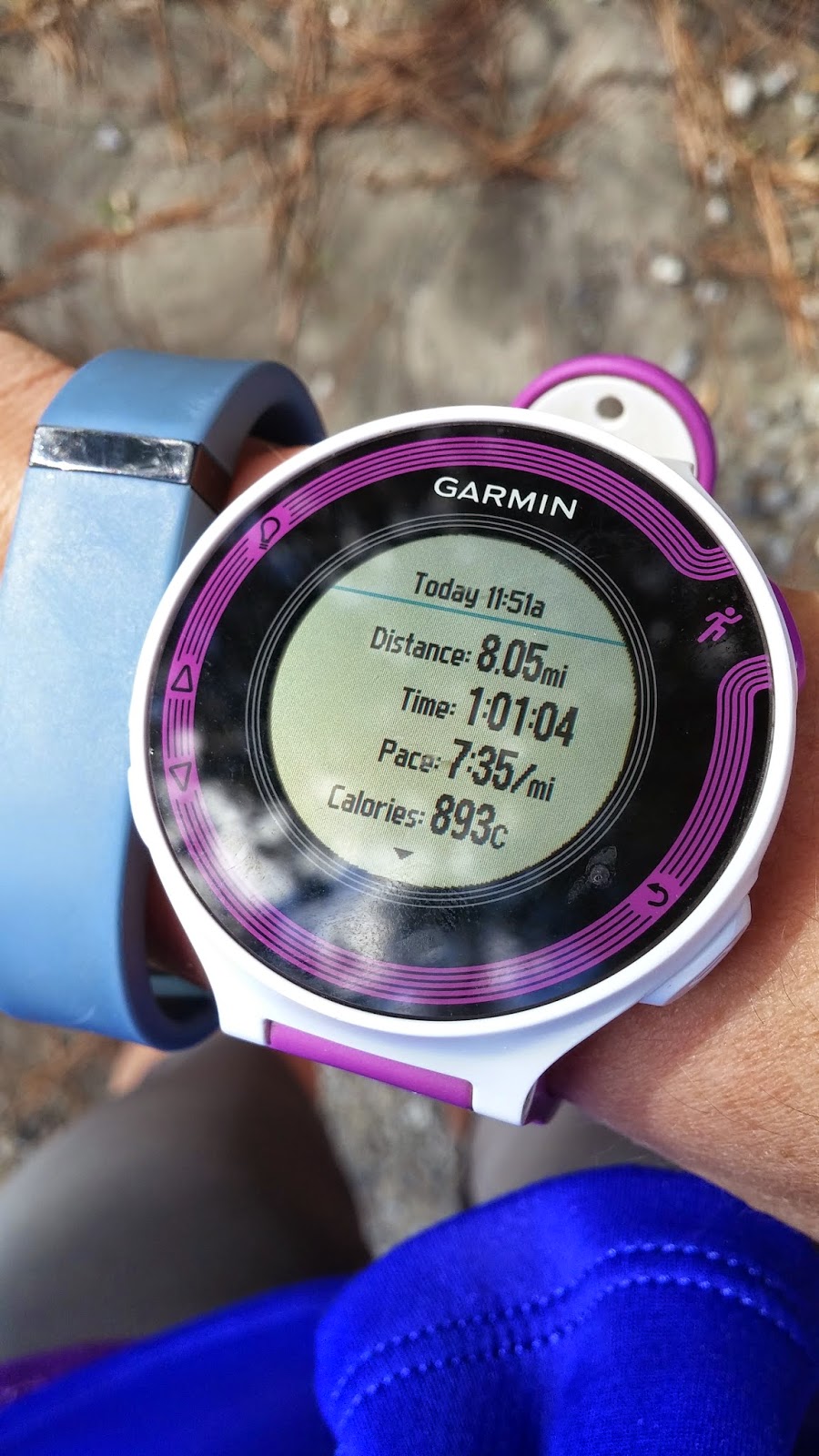 I used my beer drinking stein as a vessel for more green stuff. 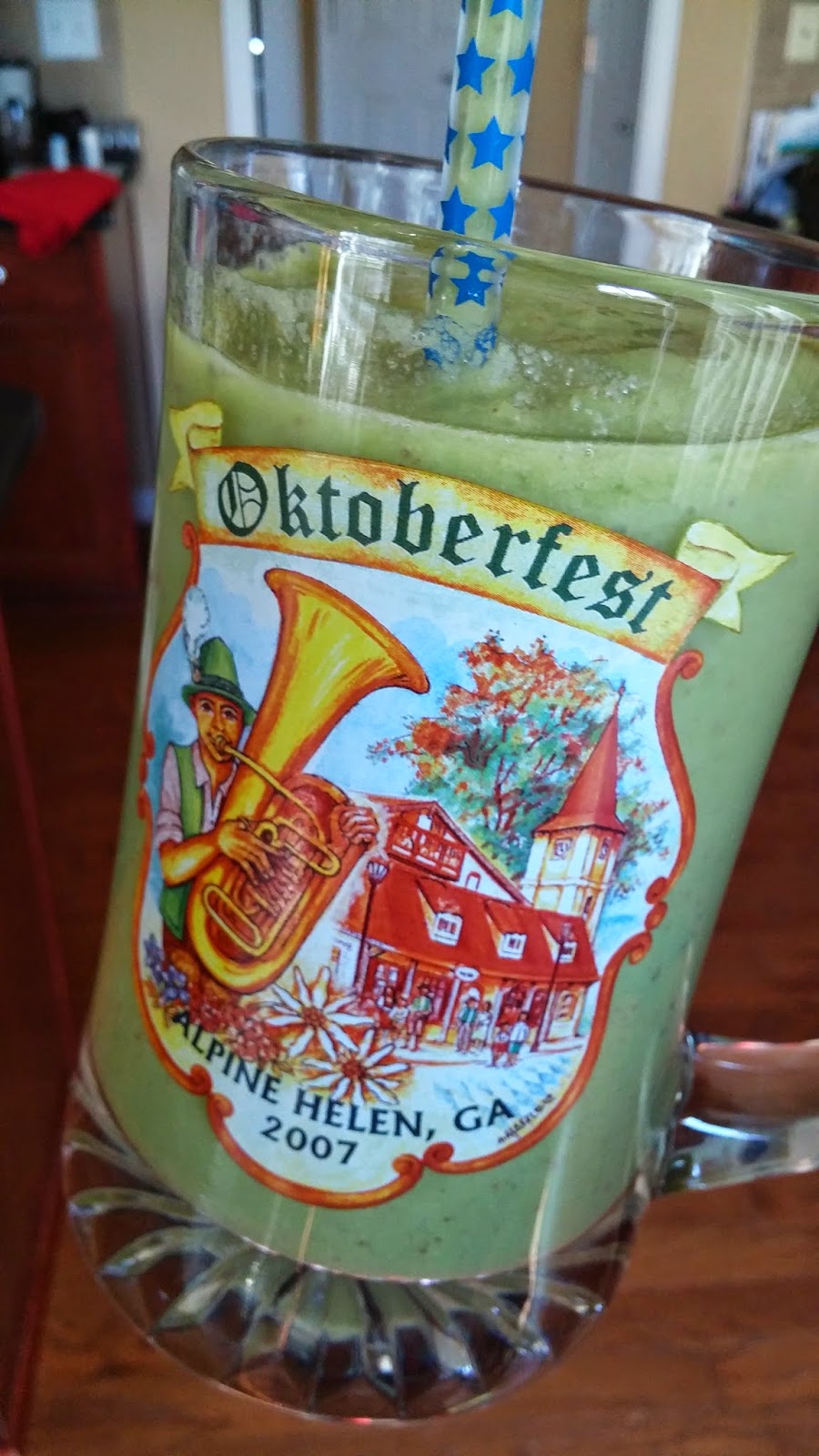 But after finishing the federal and state taxes, multiple loads of laundry, and a few articles for the website, I decided it was time for some comfort food. 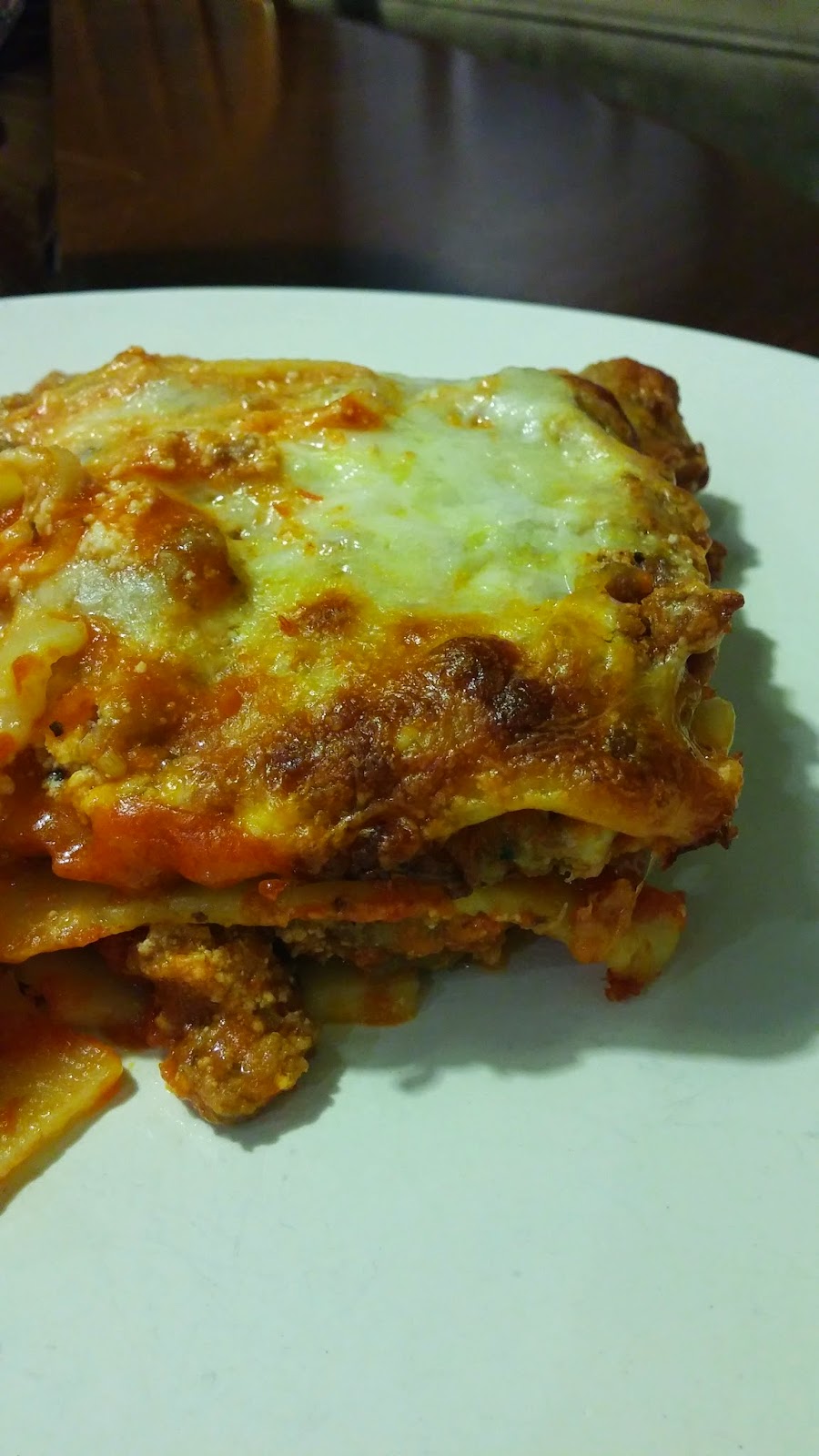 And now I work on the last minute decision of a trail marathon on the 21st, convincing Adam I won't die doing the Mitten Challenge, and figuring out how to encapsulate one iota of that brilliance that comes to me while running.