It's 2:30 a.m. I'm finishing up my 34th mile. Everything is uncomfortable. I am drenched in sweat. My legs are cramping from lack of hydration and electrolytes. It is dark and has been for the past 5 hours. The shadows are beginning to play tricks and the small section of single track is getting tougher to navigate.

But I keep going. One foot in front of the other. Moving faster when I can, moving slower when my body fails me.

It's been a long time since I've felt so low while running. It humbles me. It rips my confidence up and slashes right through my happiness. I latch on to the fear of running twice the time in just 3 short weeks in likely similar conditions.

I make and eat a giant stack of blueberry pancakes. Carbo-load time. 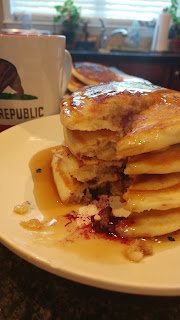 Then I had to burn away an entire Saturday of basically doing nothing. With the race looming, it was really hard to keep my excitement at bay. I read a bit (David Miller's AWOL on the Appalachian Trail) and took a nap. I ate some pizza mid-afternoon and made sure I was hydrating all day.

I piddled around collecting my gear and personal aid station goodies. 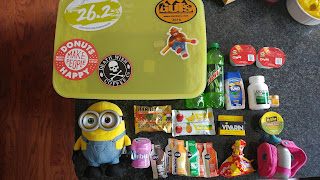 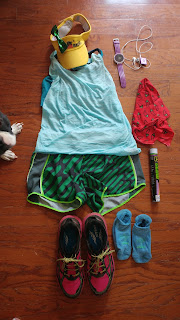 I painted my nails with a Midsummer's Night Dream theme--night sky and whatnot. And glitter. Because glitter is fun. 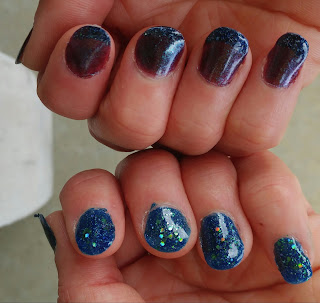 Adam got home from work and we chatted a bit before I decided it was time for me to head out. The race was about an hour from my house and I left at 6:45p.m. or so. Traffic was minimal and I made it there by 7:45p.m.

Bib pick-up was easy (as is true in all small races) and I set up my gear near the aid station. I talked to a few other runners around me and waited for direction to get started. 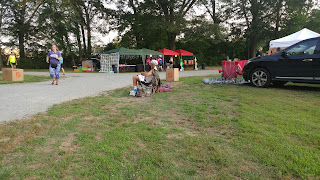 I put Bob (my spectating minion) in my camping chair with a neon glow bracelet on his head. I was hoping this would make me smile every time I came around. Unfortunately, the smiles were few and far between after this. 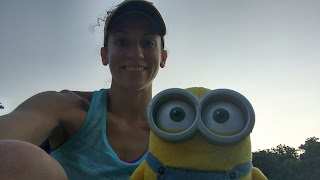 The race director told us we were to start about 100 yards from the start/finish line because the race was full. The extra distance would help to spread us out once we got to the single track section. No one wanted to be on the "front line", but I happened to be standing up there when were started which was good because the pace was pretty slow for most participants. 2 guys took out pretty fast and I followed behind a girl about my age who was running in the mid-8s.

Though it was 88* at the start, I felt pretty good for the first few laps. I didn't bother to wear my tank and once we got through the first lap, I popped in one ear bud so I could listen to music. The girl was keeping a great pace and I stayed within a few steps of her for about 6-7 miles.

My competitive side was in full force and I didn't want to stop early on at the aid station because I was sure she was running the 6 hour (I am still not really sure if she was or not). However, by the 4th lap, I needed to grab something liquid so I stopped briefly and then caught up with her.

She stopped at the 6-7 mile mark and I never ran with her the rest of the night. I think I saw her a few more times, but the darkness and people shedding clothing made it progressively harder to discern who was who.

I took a few pieces of watermelon and 2 PBJ squares in the first 10 miles, but my stomach started to feel queasy not too soon after that. I was trying to alternate Mountain Dew and water as I had at Gnaw Bone, but soon I was so nauseous that I had to grab Tums from my aid station.

I was kind of paying attention to my pace, but the darkness made it so I really only looked at my watch every once in awhile.

When I got to the half marathon mark, I started to go rapidly downhill. I think I ate a total of 4 watermelon pieces, 3 pretzels, and an orange slice in the last 24 miles. I was incredibly nauseous and could hear my stomach sloshing after I tried to drink a half bottle of water thinking it would help with dehydration. I went to the porta-potties 4 times and the intensity of need increased through the night. Several times I questioned whether or not I would make it to the proper facility in time.

Those middle miles were absolute hell. There was a group of army rangers doing a series of night exercises on the same course with full gear. I wanted to use them for my inspiration, but shamefully, I was just annoyed that I was forced to weave in between them on the same course. When their vehicles came up and down the small, single lane gravel road, I cringed at the dust and exhaust fumes.

In retrospect, there were a few good things going on. I was keeping a pretty decent pace despite all my breaks in the middle miles. My legs didn't hurt. My feet didn't hurt. I was continuing to move forward despite everything in my mind telling me to stop.

I really wanted to stop.

Somewhere near the upper 20s, I decided to just stop trying to drink anything and put my head down and move. I shuffled along and forced myself to go a lap (1.2 miles) without stopping. Once I got through that, I walked a minute or so and then repeated it again.

When I got to 2:30p.m., I contemplated the ridiculousness of running in circles in the middle of the night in June in Georgia. I could just stop and be happy with 30-some odd miles. But I tucked in behind 3 runners who were happy and talking and laying down a nice pace late in the race. So I followed behind the pack of 3 for the next 15 minutes. I let them guide me to the last lap and when the clock showed 5:47, I decided to keep going for 1 more lap when 2 of their 3 runners decided to call it a night.

I was worried that I wasn't going to be able to finish before the 6 hour mark as I headed down the single track for the last time. My body was spent. I wavered between just walking it and making a final "push". In reality, I continued to shuffle until I reached the final bend and then shuffled a little faster closer to the finish line.

I bent over and then laid in the grass huffing and puffing by the timing tent. My legs cramped up immediately after stopping and I took a few minutes to collect myself.

This was a small race. But winning overall is still really cool. And this one meant even more considering the amount of times that I was ready to throw in the towel. 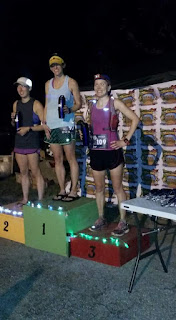 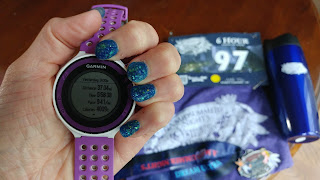 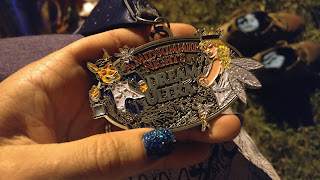 I've had a day and a half to wrap my head around this race. It wasn't the furthest I've run. It wasn't the fastest I've run. I've run in hotter temperatures. But I think these were the biggest demons I've faced while racing. And not giving up was huge. I have thought long and hard about that last lap. 5:47 is really close to 6 hours. I could have just forgone that last lap and stopped. At the time, I thought I was at least a few laps ahead of the other racers so the thought was appealing to stop. But I decided to push for one more and that ultimately was what separated me from the second place finisher.

More importantly, aside from obvious injury or debilitating pain, this race made me feel stronger as an endurance runner. Spending a little time on the dark side was good for me to experience. I have shaken it and am ready to move on.