The Boot Saga: How A Runner (Poorly) Copes Without Running 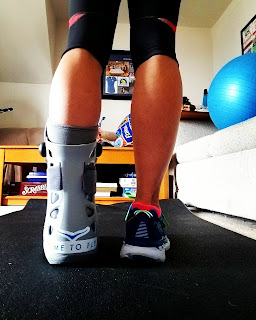 I'm fairly certain if you are reading this you are aware that I'm in a boot currently. The foot pain that started after the Jacksonville Marathon and got worse after the 40 mile Resolution Run was initially diagnosed by a doctor as tendonitis. I ignored it for quite some time because it wasn't acute pain and the only cause for concern initially was because I'd never experience soreness on the top of my foot. Seriously, I thought it was just a bruise from the repetitive pounding of my foot to the top of my shoe. (D E N I A L)

But when it didn't get any better and walking was actually causing pain, I knew I needed to get to the doctor. I went to see the amazing Lauren at 1st Choice Sports Rehab who started treating me for tendonitis. I took a full week off of running and then she recommended I try a short run between PT sessions. By the 3rd of 4th session, she suspected something wasn't going in the correct direction and asked to look at my x-rays.

She saw a spot and recommended I visit a podiatrist.

Grrrrrr! Fortunately, the podiatrist practice has two doctors who are also runners AND they were able to get me in pretty quickly. The doctor took another set of x-rays and saw a similar spot. He pointed it out to me on an iPad and I kind of gave him the same glazed-over-and-nodding look that I give when someone shows me a baby on a sonogram (oh yeah, I can totally see the hands and head....). There was something about it not being a stress fracture, but possible a stress reaction. He wanted to treat it like a stress fracture though just to be safe.

All I really heard was boot and no running and no biking. (A N G E R)

At this point, I had already gone another 9 days without any running and had run 38 miles over the 3 weeks prior. (B A R G A I N I N G) Bear in mind that 38 miles is less than what I did total for my last race. So I was already going nuts.

Outwardly, I've been trying to maintain a cool composure about the whole thing. 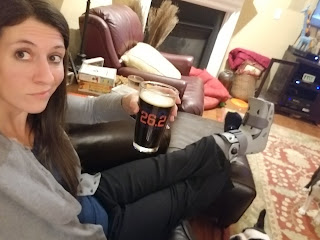 Inwardly, I've been a hot frickin' mess. The boot itself is so awkward and clunky that I have no choice but to be thinking about it 50% (okay 90%....) of the time. I've never worn a boot before and still struggle with is it too loose? is it too tight? is it okay that my foot is able to wiggle a little? oh wait, I should be able to feel my toes, right? I'm pretty sure I've Googled everything related to a metatarsal stress fracture and not-so-surprisingly discovered absolutely zero definitive answers.


I thought I was on the path to a fast recovery when I didn't have any noticeable foot pain after 5 days, but then I started having random flare ups. And as late as Thursday night, I had a bad afternoon/evening that I could feel it when I crawled into bed. I want to blame it on a very intense PT session Wednesday (hellllllllo Graston tool!!), but it's so hard to know. When I take the boot off to hobble to the shower, I can't tell if anything is better or worse because now my gait is all funky.

Pain is weird when you are an endurance runner anyway. Obviously it is part of the reason I waited so long. Marathons and ultramarathons hurt so what's a little soreness on the foot? It wasn't acute-stop-you-in-your-tracks pain like I experienced the night I pulled my hamstring in early December. This is like a mild headache that won't go away. I can walk on without any issue and though I haven't now tried since January 28th, I am 99% certain I could run on it.

However, the goal is to make it better, not worse.

The unknown is the crappy part. There is no timeline at this point. (D E P R E S S I O N) Boston is 50 days away and while it is slated to be marathon #34, I realize the smart thing would be to just not start. I have 49.5 days to make that decision. Some of you are reading this, shaking your head, thinking what I fool I would be to consider running a marathon given my current status.

And the other people are like, yeah, you're a frickin' idiot. But you're my kind of idiot and I'm pretty sure my dumbass would be sitting in Hopkinton on April 16th given the option.

Anyway, I go back to the podiatrist Tuesday for a progress check. I'm hoping the mild swelling and random aches indicate that the bone is regrowing??

Enough bitching though. My life is certainly not gone up in flames with the boot. (A C C E P T A N C E) I've been slinging weights enough that some of the workouts are becoming easier and my upper body is actually showing definition! I'm up to a 2.5 minute single legged plank (with the boot on because the extra weight will make me stronger, right??) and an 8 minute headstand. 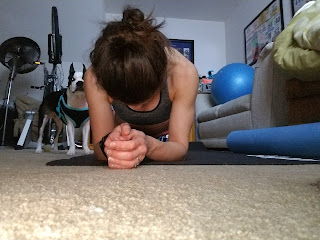 If anyone reading this ever is without the use of one of their feet, I will steer you to doing almost any ab or arm video on Fitness Blender's YouTube channel. I just prop the knee of my bum leg on a chair or use a chair to support both knees instead of standing. Most of the ab videos are foot-injury-friendly and the only equipment you ever need, if any, is a pair of dumbbells.

I was missing the sweat of cardio though so I thrilled when I stumbled upon Caroline Jordan's injured foot series. I did this video 3 times in a row yesterday. Chair jumping jacks and chair running are as ridiculous looking as they sound. But I actually have raised my heart rate to a true cardio workout doing them and sweating like I'm running made me so happy that I wanted more. 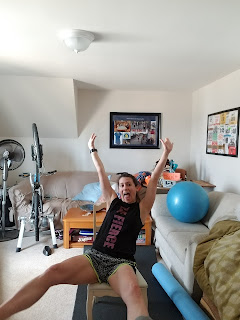 Jenster came to town 2 weeks ago and while she paced the Suwanee Half Marathon, I cheered and took a bunch of pictures of runners. They only had a finish photographer so I posted over 200 pictures onto their FB page in case anyone didn't get a great shot otherwise. 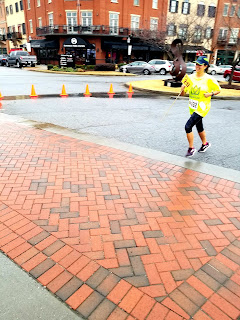 Today, I helped at bib pickup and handed out medals at a local 5K. It was pouring rain all morning and I was soaked to the bone, but I still had fun watching everyone and "participating" as best I could. 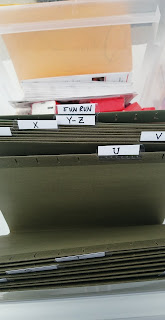 I'm headed to help out with Blind Pig 100 miler in Spartanburg, SC next weekend. I'll be helping with the timing table since my ambulatory skills are limited at this point. I plan to take my camping gear and just make a fun weekend of it.

I hadn't intended to have so many "opportunities" to volunteer this early in the year - my goal was to volunteer/crew/pace 5 or more races in 2018. I'll have at least 4 by early April! And while it doesn't take the place of being able to race, it gets me out of the house and allows me to be a part of the running community.

And to end on an extra happy note, I was accepted into the NYC Marathon with a time qualifier. This time last year, I was gearing up to go for a sub-3:15 marathon after losing out in the NYC lottery. My PR at the time was a 3:19, but I knew I had been making big fitness gains and decided to go for it at Albany. It was probably the most textbook race I've ever run. A 1:37:45 first half/1:36:13 second half. My last two miles were at a 7:07 and 7:08 with an average of 7:22 for the entire 26.2 miles. I am so thrilled to see my hard work pay off! And, NYC is in November so I will most certainly be out of this boot by then!!