It's hard to believe that the last time I pinned on a race bib was at EVEREST BASE CAMP. (Yes, I'm shouting about it. It is the coolest thing I'll probably ever do.)

I have signed up for Hinson Lake 24 Hour Endurance Run every year since 2016 when I had my sights set on running 100 miles for the first time. I had no idea what to expect in 2016 (109 miles), had big goals in 2017 (115 miles), and was less than 2 months out of the boot/training for NYC Marathon in 2018 (58 miles). This year, my big goal for fall is Javelina Jundred in October and while plenty of cool kids can go run a 100 miler one month and then do it again the next month, I know I am not one of those runners.

All summer long, I was feeling a bit of FOMO from not racing, but I was also really proud of myself for not signing up for things just because everyone else was. I truly was training for a goal race and watching my fitness build with each increasing week. I'll be the first to admit I was antsy to post big mileage numbers right after I got back from Nepal, but now I'm really happy to have the buildup go nice and easy.

Heading into Hinson, I knew it would be an opportunity for me to get in a long run as well as get some night running miles in. After conferring with my coach, we decided I would do 50k on Saturday and then 15-20 miles on Sunday morning after getting some rest. Left to my own devices, I certainly would have not had the restraint I exercised and I'm honestly happy I did.

I got to Rockingham on Friday just after noon, dropped my gear at camp, and downed a Subway sandwich in about 7 seconds. Then I came back to camp, set up my tent, picked up my bib, and went back out for ice and other supplies. I vegged out with Jenster, Angie, and John the rest of the afternoon and eventually, carbed up at the $8 pasta dinner put on by the race. We chatted for a bit around camp after dinner, drinking beer/wine and catching up. 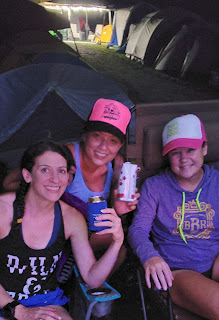 I got close to 9 hours of sleep and felt really well-rested when I woke up. The best part of camping at Hinson is that I never worry about setting an alarm or sleeping through the race because it's plenty noisy in the morning when everyone starts to stir. Morning prep went as planned (or so I thought, re: chafe prevention) and I had a bagel with almond butter and a small cup of cold brew.

At 8am, the race started and for the first hour or so, the temperature was reasonably pleasant. I decided to pick up my bottle of GU Roctane at the 3rd lap (mile 4.5) as that would allow me a few miles of not having to deal with holding it. I meant to grab a gel at that time too, but forgot and was already behind the nutrition by the time I got to mile 6 (mistake #1).

I knew in years past that I had success in staying around 10:00 pace in the beginning and could somehow manage to keep that through around 100k, give or take a few miles where I might need a little extra time for pit stops. It seemed super easy for the first couple of hours, but I knew even when I got to the first of 2 prescribed tempo parts of my run that there was no way I was going to have the gas to do it. I had basically given up before I even started. So I just kept on with my supposed forever pace until I was clinging on and just waiting for that 50K mark to rollover on my watch.
As the day warmed up, I was trying to be all proactive about staying cool and grabbed ice for my sports bra and buff. Except it was so humid that nothing was drying out and everything was sopping wet. I had applied plenty of Vaseline to my thigh, the top of my shorts, crack (sorrynotsorry TMI), and on the front part of my sports bra. However, I negated to put any on the back part of my sports bra or the liner of my shorts (mistake #4). BECAUSE WHO CHAFES FROM THE SHORTS LINER? Oh wait, I do...FML.

I felt the chafe slowly and increasingly stinging and at mile 25, I stopped and put on capris despite the rising temperatures. Fun fact: there was a huge hole in the hip on them. But it's ultrarunning and I honestly would have still put them on even if I had known it beforehand.

So I ran the last 6 miles with gaping capris, wondering how in heck I ever ran 100+ miles around Hinson Lake before and how the heck I was going to do it again in 4 short weeks.

I stopped my watch at the 50K mark and then finished my lap, grabbing a few slices of pizza as I headed to our tent. Then I proceeded to try to hydrate, eat, and stay out of the sun for the next few hours. I laid in Angie's anti-gravity chair for an excessive amount of time, grateful she was actually out running while I was eating pineapple with dirty hands.

Jen sat with me for awhile, staying out of the heat of the day and then she went back out at 5pm to get in some miles. She let me know when hot chicken tenders arrived and I did a lap to go get myself some dinner. And about an hour later, I finally had to go pee so I did another lap to take care of that at the lodge and to stop for more food. I happened to go out at a perfect time to catch a couple of great pictures of the lake at sunset.

Once it got dark, I decided to go try to just lay down in my tent even if I didn't actually fall asleep. I set my alarm for 12:30 a.m. so I could give myself some time get ready for round #2. I think I actually fell asleep a bit despite all the noise and somehow felt really good once I woke up. My legs felt fresh and I was excited to go knock out the miles left prescribed. I asked Jen if she was headed back out and tagged along with her for a number of laps. It was so nice to run with someone and my head was in a much better place when she left me to my own devices around the 10 mile mark.

I decided 15 miles was plenty and then stopped to change into my flip flops so I wouldn't be tempted to run any more. Because I was now walking, I was able to eat and drink pretty easily with each lap. I thought I should stop with each passing lap, but then I was like, well, what the heck else am I going to do? So I just kept walking and surprisingly felt pretty good just cruising around lap after lap.

The sun eventually finally started to come up, I grabbed my banana from the volunteer, and made it halfway through a lap when the buzzer went off at 8:00 a.m., signaling the end of the race. 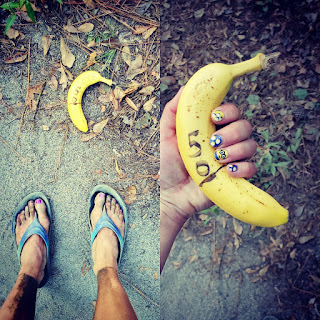 It was definitely the weirdest Hinson I've had so far. Mostly because I feel like I should be the fittest I've been since 2017, but that 50k did not leave me feeling that way. In fact, I felt like I was even less fit that last year's race! But I also know I went into the race without really much of a taper (40 miles in the prior week and some shorter tempo sessions) and it was arguably the hottest/most humid it's been since I've been racing it. So I'm trying to give myself a little grace and hope that it was a good way to get all the funky racing out of my system before Javelina!