The first time I ran the GUTS Fatass 50k was in 2016 and I was pretty new to the trail scene. I had run a trail marathon and a trail 50 miler, but those races were pretty tame in the grand scheme of things. When I read my first race report from this race, I clearly was a rookie in a so many ways.

I remember that I didn't know anyway and stood around watching people crowd in groups, clearly friends long before that day. This year, I actually think I didn't have imposter syndrome! Spotting lots of familiar faces and with numerous trail ultras under my belt, it was a complete change from that first one in 2016. 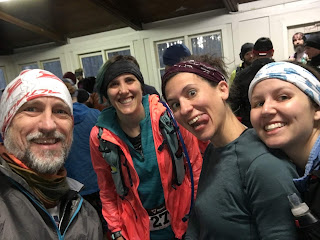 I spent the night at my sister's house last night as she is much closer to Sweetwater Creek Park. I slept soundly and was able to wake up at 6:30 a.m. Breakfast was a few pieces of cinnamon bread with cinnamon almond butter (!!) and a cup of coffee. I said goodbye to my sister and niece (my brother-in-law and nephew were still snoozing) and headed to the park. Parking was easy and I had enough time to hang out for about a half hour at the group shelter with friends before the race started.

This year, I was kind of in the middle of the pack when it started and got stuck when we hit the single track. This proved to work in my favor though because it was the perfect pace to get in a solid warm-up and not push the pace too hard from the beginning. It was supposed to be a training run after all.

The race is six total loops of just over 5 miles with a mixture of single track, fire roads, and a teeny bit of road. Aside from a few sections, it is really, really runnable which I realized after doing lots of trail runs with vert that I'm really used to having a lot more time to climb in my run (and lower my HR!).

I cruised behind Dan for awhile in the middle part of loop 1 and listened to the runners around me chitchatting. I knew the field would thin out as the day progressed so I latched onto the early entertainment. Nikki caught up to us towards the end of the loop and took off ahead. 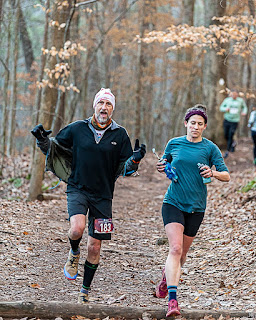 Coming into the first loop, I filled up my handheld with half Powerade/half water and grabbed a few potato chips. I brought 3 gels and was just using a handheld, attempting to stay as minimalist as possible with the loops being so "short". It was cold enough that my 17oz bottle was good for this race, but I think if it were too much warmer that I'd have to really commit to drinking 6-8 ounces more at the aid station.

Loop 2 was relatively uneventful except for the final 1.5 miles that I was most uncomfortable because I needed the port-a-potty. I smartly remembered to put my gloves and water bottle outside the door, but forgot about the gel I tucked in my waistband. And of course it fell right into the pot. Needless to say, I was not retrieving it.

So now that I had just two gels, I grabbed a cookie and few pretzels as I came through the aid station. It was kind of hard to eat the pretzels and jog on the pavement, but I managed to get them all shoved in my mouth by the time I got back to the single track. I took one of the gels during this loop, hoping it would give me a nice little sugar rush.

I passed a bunch of people during loop 3 and ran hard with a bunch of people at the end of the loop who were finishing up the 25k. My legs were feeling pretty good and I was bombing the downhills pretty hard when I had the opportunity. As I got back around to aid, I ate a couple of PBJ slices and grabbed a few more chips.

The field was definitely more spread out during loop 4 and I ran by myself during the first half. Down by the river, I got caught behind another conga line for about a half mile, but I was happy to take my foot off the gas for a short while. I hit a couple of funky spots during this loop. My legs were starting to get tired and I was thinking about all my friends who did the 25k who were already done! But I also knew that nothing was inherently wrong and though I was a bit bonkish, I was still moving really well.

At the end of loop 4, I knew that even if I slowed down a minute per mile that I would come in with a pretty respectable time. I took a couple more slices of PBJ and Swedish Fish and tried to keep motoring as best I could. I knew I was slowing down a bit, but I tried to just stay relaxed when I could and take advantage of what I felt like were strengths - basically anything but flats!

I was still able to muscle up all the hills running except the stairs and the section right after. I took my now-final gel and perked up a little with the extra fuel. Allison and Ben were coming the opposite way near the end of the loop and I stopped briefly for hugs and hellos.

Before going out for the final loop, I grabbed a huge handful of Swedish Fish and took a swig of Keith's beer. I knew it was just 5ish more miles of running. Though I really wanted to walk some on the single track and fire roads, I made myself shuffle along. Towards the middle of the loop, I started running behind Brian who was on his 5th loop. He was cruising along at a nice pace and not walking the ups so I stuck with him until the end. I probably could have redlined it the last two miles for a couple of extra minutes, but it really didn't matter and I was so happy to have someone to talk to for the final few miles.