Boston Marathon 2020 RR: The One During The Pandemic 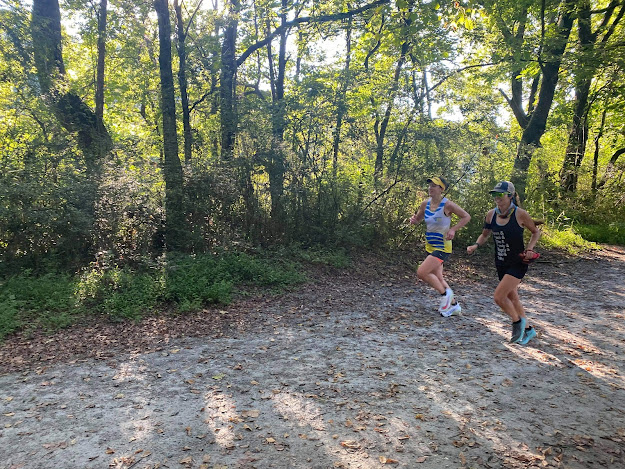 When Boston was postponed until fall, I dreaded a summer of marathon training. Truth be told, I was pretty excited when it was moved to a virtual race for selfish reasons. The self-induced pressure of performing seemed much more relaxed if I was not being tracked. As the summer wore on, I felt like I was grasping at any ounce of fitness I could find, desperate to find a shred of my former self lurking inside.

The unknown of the impending months crept into my mind and though life is seemingly good all things considered in this pandemic, I couldn’t help but think that it is rattling me more than I can articulate. At first, I was jealous of those who seemed to be finding their stride in all of this. But then I realized that it’s just not where I’m at right now. And honestly, it’s the longest string of healthy and good feeling running I’ve had, despite feeling like I cannot go any faster than second gear.

I originally had planned to run Boston on September 14th, the date that it was postponed to back in the spring. It gave me 5 days to recover until the Georgia Jewel 35-now-37-miler, but I was not really feeling excited about either race so I just kind of put it off planning for it. And then when it popped up on Final Surge on September 7th, the app my coach uses for my workouts, I was like, huh, guess I better decide.

Even early last week I was still kind of on the fence about when and where I was going to run it. Weather was largely the deciding factor. When I saw that Labor Day Monday morning was looking good last Wednesday, I texted my coach and told him that I wanted to adjust my workouts down so I’d have fresh legs for Monday. After all, I’d run 30 miles over the prior weekend and though they were all easy miles, I knew that I was not optimally tapered.

I bought a pair of Alpha Flys and they arrived in just enough time to put a few miles on them before the big day. Yes, they were not really necessary on the crushed gravel surface that I was running on, but I was grasping at straws for it to not feel like a complete bust.

All the things I have come to anticipate with the race each spring were no longer the agenda for the weekend. The whole fanfare of the weekend is just as joyful as the race and it seemed odd to be “racing” without the added hype. As much as I tried to brush it all aside though, my brain definitely shifted into race mode about 36 hours from my chosen start time. It was weird. I was expecting to not feel any nerves or excitement and it was quite the opposite!

I started laying out my gear, my nutrition, and even my water bottles as early as Saturday afternoon.

My plan was to use my car as the water/nutrition stop and run in 1 mile loops. This was so I didn’t have to worry about carrying anything, crossing streets, or calculating mileage. On race morning, I woke up at 5:25am, choked down half a giant bagel, drank half a cup of coffee, and filled up my bottles with water and Gatorade. Then, in keeping with good juju and tradition, I took a "Marathon Monday" selfie.

I got to the race “start” at around 6:15am and laid out my box of nutrition, hydration, bib number, and Spike (the stuffed unicorn, aka my cheer squad). It was still dark out so I popped on my headlamp and walked for a minute or so as the most modified warmup ever. And then without anyone watching, I began racing a marathon.

I’d be lying if I said it wasn’t weird. I was fighting off the urge to go too fast in the beginning as my legs felt fresh and the temperature was amazing. But I also knew that I was playing with house money. If I blew up, the worst that would happen was that I’d have to walk it in and feel a little sorry for myself. If it was my day, I could run a really great marathon. The phrase swing for the fences popped up in my brain a few miles in and while I knew I wasn’t in PR kind of shape, I was ready to just see what I had.

The first hour went by really well. I was feeling good, not looking at my watch at all, just running by feel and counting the laps. I planned to take a gel every 4th lap and then water and/or Gatorade as needed. I took off my headlamp by around the 5th or 6th lap and enjoyed the sweet spot of the early miles, cool morning, and the sun still behind the trees. A layer of fog from the river hung in the field and while it was no match for the crowds of Ashland, it was a pretty decent consolation prize.

Cars began to trickle into the park and I soon was sharing the space with other runners, walkers, a few cyclists, and even a few people dropping their canoes and kayaks into the river. Every once in a while, I’d have to dodge a larger group or hop onto the grass, but it remained pretty easy to navigate throughout the morning. I was tempted to check my watch for splits as the miles wore on, but I decided to save the runner math for later in the day and just keep running by feel.

At the end of mile 13, I paid homage to the Wellesley girls tradition and kissed Spike the unicorn as I stopped at my aid station to discard the gel wrapper from mile 12. I thought it might be a little weird that someone would see me kissing a stuffed unicorn, but shrugged internally and did it anyway.

As the miles crept further into the double digits, I started to feel the nag of negative thoughts and had to remind myself to just try to keep my headspace as neutral as possible. I give all my shoes names on Strava, partly to tell them apart, partly to give myself a little motivational boost. I happened to name my Alpha Flys “No Human Is Limited” ala Eliud Kipchoge and adopted that as my race mantra. Maybe it’s silly, but it distracted me briefly from the task at hand.

I finally allowed myself to look at what the time was around mile 14 and saw that I was actually running much better than I expected. I was definitely in the sub 3:30 range!

I picked up a gel at mile 16 and was getting excited that I was now entering into the portion of the run that I had less than double digits to go. I took huge swigs of water and Gatorade after tossing the wrapper in my trash bag and made the short little out and back turn. As I came past my car again, an immediate wave of nausea had me coughing and then stopping. I puked up a little bit of liquid, walked a couple of steps and then got right back in it.

As I came around the loop on the sunny side, I spotted a runner wearing a tank top that looked familiar. And then when I noticed her stride, I realized it was Chantal! She hopped right in with me and, spoiler alert, stayed with me to the finish. I was definitely working for every breath so I told her I wasn’t really able to talk much, but I was so relieved to have her there. It was definitely getting into the nitty gritty part of the run and after my puke, I was unsure of what the last hour or so was going to look like. 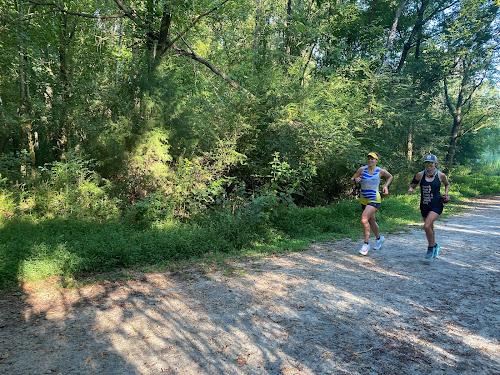 The two of us ran the loop and we were nearly to where I spotted her when we saw Jared leaning against his car in the parking lot. Wow, two surprise pacers! Luckily, both of them were able to talk and it was nice to just listen to snippets of conversation and interject every once in a while. I grumbled here and there about how hard marathons were and shouted out how much further I had left to go. 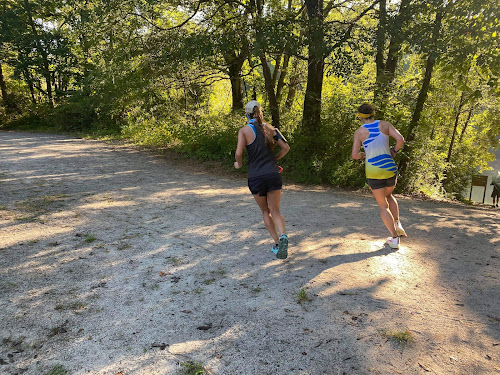 I was stopping more often for hydration as the day warmed up. The sunny side was getting increasingly hotter and I felt myself pushing harder to reach the shade. My tank was sopping with sweat, but I didn’t want to waste any time removing it and hoped that the wetness would at least cool me off. 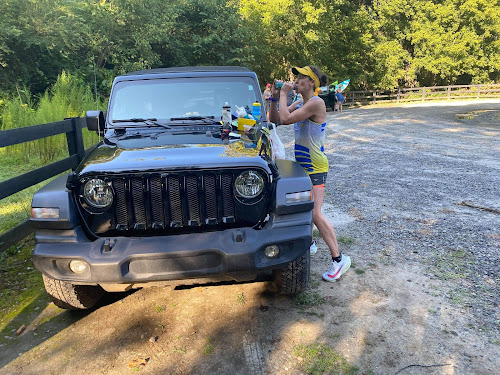 With 5K to go, I knew that I had a sub-3:30 in the bag as long as nothing crazy happened over the final miles. It was definitely getting harder and I knew I was slowing down a bit, but having Chantal and Jared there helped me keep the pace honest. 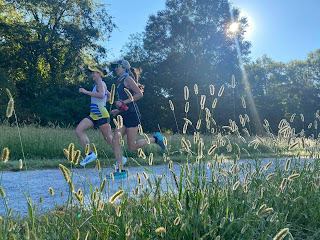 When I knew I had one more loop to go, I began doing a body check to see if I was going to have anything left for a finish line sprint. I wasn’t completely gassed and decided to wait until I hit the mile 26 mark. We neared the car and the Sullivans were there! I was so excited to see more friends AND know that I would be celebrating with them very, very quickly.

When my watch chirped for mile 26, I gathered everything I had in me and just laid it out. Time seemed to stretch on forever as I pushed to the imaginary finish line. I checked my watch and gauged that a post in my sightline was far enough away to call it the finish line. I definitely did not want to be at 26.19 miles! So I called it out and as I crossed the “finish” saw it was enough to finally tap the stop button. 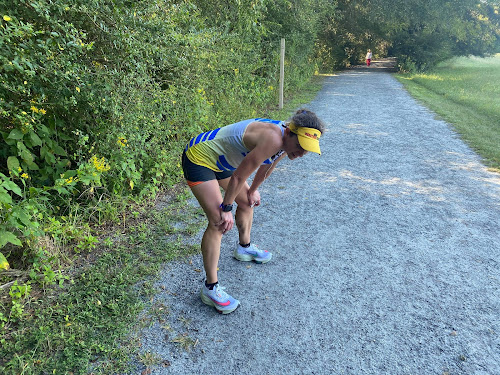 As I hunched over and caught my breath, I was so freaking excited to be done, have amazing friend support, and surprise myself with a great marathon time. It actually tied my 12th fastest time and though I died a little in the end, my second half was only 43 seconds slower than the first half (1:42:31 versus 1:41:38). And if I stick in all the asterisks I can about how it could have been better, I’m feeling really good about it.

Once I collected myself, Chantal, Jared, and I started walking back to my car and met up with the Sullivans on the path. We all eventually wandered over to my car and stood around on a pretty perfect September morning, chatting and watching the kids play.

It might not have had the crowds and the wild atmosphere of a Boylston finish, but I’ll hold onto tight to this one for different reasons.